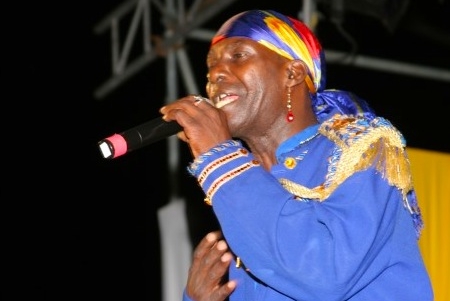 In what is expected to be quite a big show this coming Saturday, one of Trinidad and Tobago’s most decorated Soca artistes, Austin ‘SuperBlue’ Lyons will make his presence felt at Fire Fete 2013.

The event, being hosted at the Queen’s Park Savannah in the capital city, Port-of-Spain is one of the most highly anticipated carnival fetes annually, as organisers tout it as the fete to truly start the Carnival season. This year, revelers attending the event are in for a treat as not only are they going to see and experience tremendous performances by the top billing acts of 2013, but they will see, first hand, the power of a living legend.

SuperBlue as he is fondly known in the Caribbean and worldwide has been crowned with eight Road March titles. His hits are endless and still, many years after he started in the Soca business, the man who gave the world songs like Ethel, Barbara, Lara, Flag Party and countless others, is in 2013 proving that he still has what it takes to send people wild with excitement.

SuperBlue’s hit single (‘Fantastic Friday’) for the season, Soca Monarch, has been receiving a lot of praise across the industry and on the carnival circuit. Many are already crowning the artiste ahead of the usual Fantastic Friday Soca Monarch competition, however with a way to go still, events like Fire Fete this Saturday, Soca For Life at Prison’s Sports Grounds in Arouca on January 26 and Army Fete on February 1, could ensure that Super Blueâ€™s song does in fact make that impact that’s desired. On Saturday, he will likely be seen on stage with his daughter- former Road March, groovy and Power soca monarch queen, Fay-Ann Lyons who will come up against her father in the major competitions in 2013. Many anticipate that possible encounter this Saturday, to be quite an exciting one.

“This year’s event will be really interesting to see. We know the flag crews will make their presence felt up front at the venue and with performances carded by Iwer George, Bunji Garlin, Farmer Nappy, Denise Belfon, 5 Star Akil, Jahmoun, Blaxx, Nadia Batson and so many others, Fire Fete is a guaranteed good time,” said an organizer.

Tickets for the event have been selling very well. The first batch of tickets started at $100- something that enticed many, as such a price for any event in this era, is almost unheard of. An early carnival season means an early start to the big fetes- Fire Fete being one of the ‘must attend’ carnival fetes for the season.