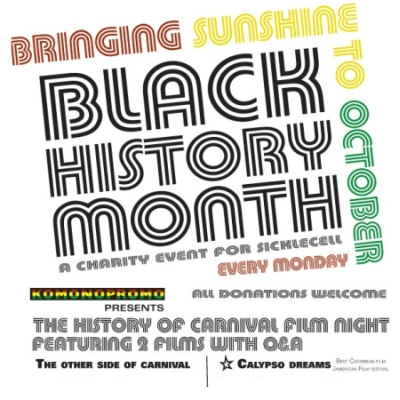 The History of Carnival Film Night for BHM 2011

If you see Keith Musaman Morton, you would think he is just a soft-spoken man who gets on with his life. However, Morton is on a mission; a mission to highlight films made by black directors. The urge came about after Morton attended a film festival in London celebrating black films.

“There were only about five people in the screening room,” Morton reminisced. “I was so disappointed, because the film I was watching was really good, but no one came to see it. That is when I decided to do something about it.”

His first point of action was to hold a talk with black filmmakers from London with the hopes of starting a group that will showcase each other’s films. However, when no one seemed too interested in collaborating with him, Morton decided to go solo.

“I knew that Black History Month would be a good ‘hook’ to get my point across. I just needed to figure out what I would do,” Morton said.

After coming in contact with two films exploring Trinidad & Tobago’s Carnival and realising how popular London’s Notting Hill Carnival gets each year, Morton figured out a solution to his dilemma.

“I decided to put together a film series that runs every Monday in October to explore the history of Carnival. While everyone has heard of Notting Hill Carnival, I want to introduce how that event – including the sights and sounds – has come over to London,” Morton explained.

The History of Carnival Film Night features two films that look at different aspects of Carnival. The Other Side of Carnival, by Charysse Tia Harper, offers a critical look at Trinidad & Tobago’s present-day Carnival. Calypso Dreams, by Dr. Geoffrey Dunn, is a celebration of Calypsonians featuring The Mighty Sparrow and Lord Kitchener. Each week, there will be a different person to speak during the Q&A session.

In addition to educating the audience on Carnival, Morton decided to use this event as a platform to assist The Sickle Cell Society, to raise awareness and funds for sickle-cell anaemia, a disease that is prominent in the black community.

“My friend always wanted to make a film about sickle-cell anaemia. He died last year from the disease,” Morton added: “This is my way of trying to help a topic that he was so passionate about.”

Having been born in Birmingham from parents of St. Kitts ancestry, Morton studied at The Video College of Kensington and Chelsea. After completion, he worked in London where he did freelance work for companies, such as BBC, Channel 4 and Sky.

In 2010, Morton filmed a 20-minute docudrama Day One, which explores the events leading up to a woman making the decision to begin her first day of drug and alcohol recovery. The short was filmed entirely in Brixton. Day One won the Audience Appreciation Award at the New York International Film Festival (2011).

Though he has received international exposure that has not stopped Morton from trying to reach out to a wider audience on the domestic front.

“I started Komonopromo as a film production and distribution company,” Morton stated. “Making a film is not the hard part; finding distribution is.”

As Komonopromo has been focusing on networking with filmmakers from across the globe and screening its projects this year, the company will become more aggressive in 2012 with obtaining distribution connections.

“As an independent filmmaker, you are the director, writer, producer, publicist and any other role that you cannot pay or get someone to do,” Morton said with a laugh. “So, yes, getting Komonopromo off the ground has taken some time, but that does not dissuade me from pursuing my dream.”

For his next project, Morton would like to do a feature introducing youths in a positive light.

“Recently, many black films that have been sponsored by the BBC showcases blacks in connection with drugs, alcohol and gangs,” Morton explained. “We have 10 million other stories to tell. We just need a place to have them heard.”

The History of Carnival Film Night will be shown at Living Bar from 7PM to 11PM every Monday in October.