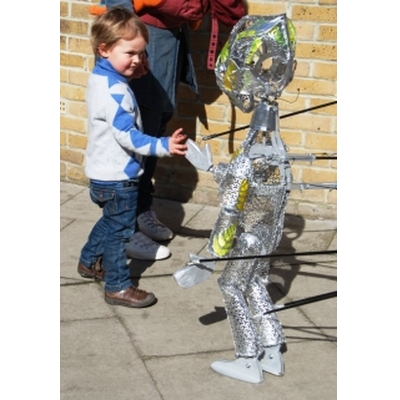 Imagination: Our Nation, a national participatory arts project, which celebrates diversity and inclusivity in communities, has been granted the Inspire Mark the badge of the London 2012 Inspire Programme for the second year running The London 2012 Inspire programme recognises innovative and exceptional projects that are directly inspired by the 2012 Olympic and Paralympic Games.

Imagination Our Nation is a national project exploring citizenship, inclusivity and diversity, how to become fit for the future, as well as leaving a legacy. It links very strongly with a number of the major strands of the values and vision of the Cultural Olympiad, including: generating sustainable long-term benefits to our cultural life; using creative industries to boost economic regeneration; generating a legacy; animating and humanise public spaces; and inspiring young people.

Imagination our Nation: creates a story over 5 years. GermiNation 2008 Sowing the seeds for the future – creating the project; FasciNation 2009 Champions are born and wake up to a world of opportunities – engaging communities to discover their challenge; DetermiNation 2010 The Champions embark on their journey – finding a solution to the challenge; IllumiNation 2011 Teams of Champions work together to find solutions and create a gift; ImagiNation 2012 12 Champions, 1 from each region and nation in the UK lead a procession to East London for the collective sharing of the vision for the future. This finale culminates in a gathering of the regions and nations in a national celebration of our ‘Future Champions’ and all of our communities.

In 2008 Kinetika delivered GermiNation, a national programme that engaged with communities in 6 regions to begin to imagine their future. We presented 14 performances engaging 3,500 participants.

In March 2009 we launched FasciNation with a ‘pilot’ national residency in East London engaging 20 partners across the UK. As a consequence there are more than 50 events taking place working led by more than 100 local artists engaging over 10,000 participants.

FasciNation has seen the Champions, 17 small puppets, being made by Kinetika partners from different UK regions. The East London Champion is ‘Chaz’, a young girl from the moon who arrives in Hackney in the Summer of 2009. Through her eyes, she sees Hackney for the first time and its wonders are brought to life in the costumes designed and made by the participants of Championing Artists. 11 individual costumes celebrating the diversity of culture, religions, sights and sounds of Hackney make up the New Moon in Hackney procession which will appear alongside the Kinetika Bloco at The Mayor’s Thames Festival Night Procession on 13 Sept and Hackney One Carnival 27th September

This new section has been created through Championing Artists, a Creative Leadership programme supported by the LDA through The London Cultural Skills Fund giving training in design, making and production for outdoor performance. Seb Coe, Chair, London Organising Committee of the Olympic Games and Paralympic Games, attended one of the Imagination our Nation events at Comberton Village College in Cambridgeshire, and said: Imagination: Our Nation is encouraging diverse and inclusive communities, in particular the youth of today to fulfil their potential. I am proud that with the help of partners such as Kinetika, we are delivering on our vision to use the power of the Olympic Games and Paralympic Games to boost participation in performing arts.

Ali Pretty, Founder and Director of Kinetika, who created Imagination Our Nation was inspired by Derek Walcott’s simple yet powerful idea ‘The only nation I have now is my imagination’. Ali says “I wanted to create a project that engaged with the youth of today who are citizens of the future, using the performing arts as a tool to facilitate conversations about inclusivity and diversity within communities” Ali continues “Kinetika has initiated Imagination Our Nation, a five-year project that will culminate in 2012 with a major event in East London which aims to leave a legacy of youth based participatory art in communities through out the UK.

By enabling participants to take part in a series of linked performances that will culminate in a national cultural experience, Imagination our Nation hopes to reach over 3 million people in the UK during the next 4 years.

Kinetika – With over ten years experience in design, production and performance, Kinetika has taken the spirit of carnival and delivered it to places and people all over the world.We took our initial inspiration from the Trinidadian model of carnival, with its elaborate costumes and breathtaking music, we have now developed our own unique model. Our projects and performances have taken us far and wide – from the Notting Hill Carnival to the Cultural Olympiad in Beijing, from the Kolkata Carnival in India to Nelson Mandela’s statue unveiling in Parliament Square.