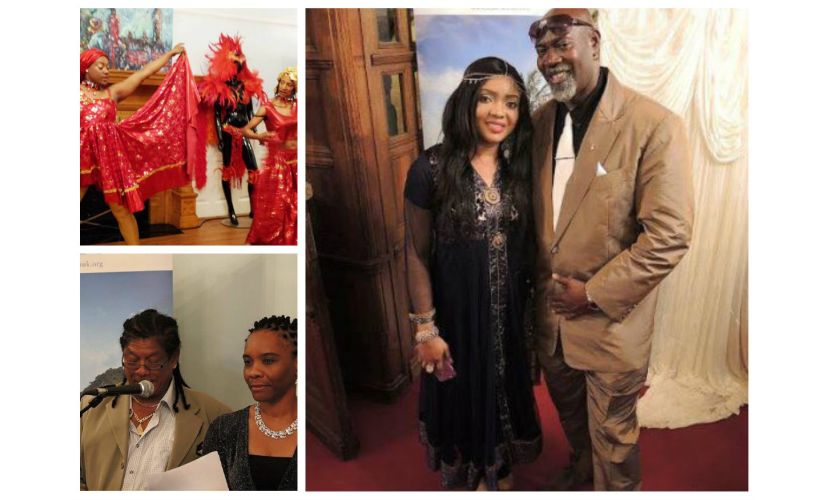 It was indeed an evening which mirrored sophistication and class, “An electrifying affair” as aptly described by Mrs. Debora Alleyne De Gazon, Creative Director for The London Notting Hill Carnival Enterprises Trust, (LNCET). She referred to the launch of the 2015 Notting Hill Carnival held on the evening of Thursday, 13th August, at the office of the St. Lucia High Commission.

The program called for all to be seated by 6:45 pm, and early arrivals were greeted by girls in costumes and serenaded by St. Lucian born saxophonist David Fitz. To officially commence the start of the evening’s proceedings at exactly 7:00 pm, Fitz found himself playing the national anthem of St. Lucia, to a packed house.

The presenter for the evening was Mr. Lewis Benn, one of LNCHET’s Trustees. In his welcoming remarks he acknowledged the many dignitaries and specially invited guests, starting with H.E. Dr. Ernest Hilaire, The St. Lucia High Commissioner, other Ambassadors, Cultural Envoys from Antigua & Barbuda, Iceland, America, Georgia, Trinidad & Tobago, Haiti, Poland, Bulgaria, Mexico and Zimbabwe to name a few.

Stakeholders in attendance were representatives from the Royal Borough of Kensington and Chelsea and the London Metropolitan Police officials who are regularly tasked with organizing the policing of the carnival and ensuring the safety of all.

Mr. Benn also extended a warm welcome to the various specially invited media houses, carnival pioneers, IMD Legion dancers and other arts organizations, performers of dance, theatre and song and the many organizers instrumental in weaving the tapestry of this year’s carnival under the theme, ‘The Emergence of Carnival’.

Mr. Benn’s welcome was sharply followed by a traditional Caribbean dance presentation by Muraldo DC Juniors who were very well received as they started the entertainment component for the evening.

The blessings were rendered through the enchanting voice of Nigerian Gospel Singer, Sophy-Yah who had the audience swaying and singing along with her first song, ‘Halleluiah’. She also had them in agreement with her second selection entitled ‘God Can’.

Then came the multi talented Calypsonian, King Socrates, a cultural ambassador from St. Kits and Nevis to render a song entitled ‘In 2034’ that was specially written for the carnival launch and the theme the ‘emergence of carnival’. His lyrics while documenting the origin of West Indian Carnival, focused on 19 years from now into 2034 when we will be observing the 200 year anniversary of the emancipation of slavery. Needless to say it was much thought provoking and well received. Socrates later returned to the stage to do a steel pan rendition of Lord Kitchener’s ‘Pan Night and Day’.

Other performers were Canadian Base Trinbagonian actress, writer and director who with Roger Spencer presented an excerpt from the play ‘Carnival Medea – Bacchanal’, Muraldo DC with a Zouk Dance, presentations from Mas bands Yaa Asantewaa Arts Centre, DSKII Mas and Xtreme.

An overview of LNHCET’s endeavours, accomplishments and entrepreneurial approach for the development and sustainability of Notting Hill Carnival was jointly presented by the chairman Mr. Augustine ‘Pepe’ Francis MBE and the Creative director Mrs. Debora Alleyne De Gazon.

The Ambassadorial Patron of London Notting Hill Carnival 2015 and the host of the launch, H.E. Dr. Earnest Hilaire, High Commissioner of St. Lucia spoke of the all inclusive vision and scope of LNCHET and he challenged all the islands of the Caribbean to be part of the 50th anniversary of Notting Hill Carnival in 2016. In closing he committed his full support and wishes of success to the organizers.

The London Notting Hill Carnival has undoubtedly become the largest carnival in Europe and over the last three years, the lead up to what will be its 50th anniversary celebration in 2016, its Creative Director Mrs. Debora Allyene De Gazon has spearheaded the drive for the involvement of more of the Islands of the Caribbean, Europe and other countries.

The position of the LNHCET’s Creative Director is that this must not be seen as ‘just a Trini thing’, against the backdrop of the emergence of various nationalities and cultures from throughout Europe, establishing themselves in England and seeking their fair share of funding from the arts council to have their own carnivals, its imperative that more of the Caribbean Islands be encouraged into playing a much greater role in celebrating a truly west Indian Carnival.

Mrs. Debora Allyene De Gazon a national of Trinidad and Tobago is exceedingly proud of her Afro Caribbean Heritage, her Trinbago’s roots and the contribution of her nation in using carnival arts as a diplomatic tool highlighting, showcasing, exporting, expressing and educating people about the Caribbean. Her vision is to use the power of carnival arts to foster the development of relationships, enabling greater involvement in the weaving of the London Notting Hill Carnival tapestry .

This explains why the 2014 and 2015 LNHCET launches were held at the residence of The Barbados Acting High commissioner in 2014 and The High Commission of St. Lucia, respectively.

Carnivals in the UK