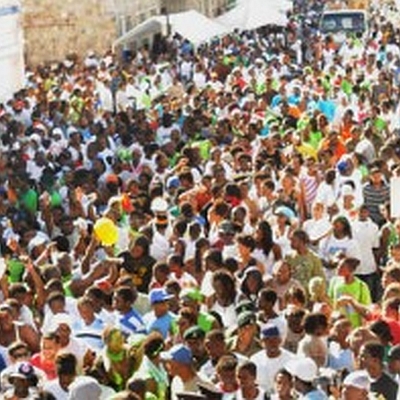 A surprise road March winner announcement brought the St.Kitts-Nevis National Carnival 2007-08 to a slightly controversial and very exciting end on last lap January 2nd 2008. The streets of Basseterre were flooded with revelers and mas players jamming to the sounds of various sound systems, dj’s and bands.

The air was filled with the top tunes for Carnival 2007-08 which included In De Middle and Naughty Shorty by Small Axe, Walk away by King Konris, Tremble it by the Lights Out Band, Reverse De Ting by Collision, Band a Lion by the Sugar Band, Party in Da Streets, My Life, So Wine and DJ Play by d’Vybz and Boom Bam Bam by The Grand Masters Band.

These were all very popular carnival tunes and some were contenders for the road March title. However Small Axe’ In De Middle, King Konris’ Walkaway and Grand Masters’ Boom Bam Bam separated themselves from the pack particularly on Carnival day and last lap. Grand Masters Boom Bam Bam was declared the surprise winner for the St.Kitts Carnival Road March title beating Small Axe’ In De Middle and King Konris’ Walk Away, particularly on the final day of road march judging.

The Digicel Inferno’s “The People who came” troupe was declared band of the year with 317 points ahead of Zodiac 1- The Elements by Banker Mas Camp with 300 points. Last years winners the Phunnmakers rounded up the top 3 with a 3rd place finish with Mas Xotique amassing 241 points. DJ Ronnie Rascals Extreme Jouvert Jammaz was adjudged best jouvert troupe while Peacock King from the Mas Xotique troupe won the King of the Bands award on parade day. King Konris equalled the record of the Legendary King Ellie Matt when he became just the 2nd calypsonian to win 3 straight Calypso Monarch titles. The National Calypso Show was the most exciting and largest in recent history . Konris gave two spectacularly memorable performances of ‘One Song’ in the first round and ‘Sleeping Tiger’ in the 2nd round. Konris’ closest competitor Big Lice was some 77 points behind in the 1st runner-up position. Big Lice was extremely popular with the large audience but Konris was simply too much on this night and was undoubtedly the King. Lady Sunshine got a surprise 2nd runner-up position while Queen Anastasia who herself made history just two nights earlier when she became the first Queen to 3-peat when she won the National Calypso Female Bacchanal, rounded up the top 4 positions.

The other Calypsonians that participated in the finals were former Monarchs Ayatollah who gave a splendid first round performance and Pungwah who performed credibly in both rounds. The Mighty Pat as well as 8 time Nevis Calypso King Dis and Dat were the remaining performers on what was labeled as the best calypso show in recent times as the standard exceeded that of last years memorable finals which featured a fierce battle between Anastasia and King Konris.

The beautiful and lovely Ms. Mariece Roberts gracefully walked away winner of the National Queen Pageant and the title of Ms. St.Kitts 2007-09. The young beauty amassed 424.5 points to clinch the prestigious title. In addition to winning the overall title, Mariece also won the Best Interview segment, to cap off a well rounded performance.

Ms. Beaumont Park, Fatisha Imo, took the First Runner up spot. Her points total of 420 is indicative of just how competitive the fight for the crown was. Fatisha also topped two segments- Best Evening Wear and Best Costume- in her bid for the crown.

The Second Runner up position was awarded to Ms Cindy DeSouza, with 401.5 points. She also won the Swimwear segment.

The Best Talent Segment was won by Ms.Chevaughn Claxton, the lone contestant from Nevis. The other two contestants were Ms. Shanel Bart, and Ms. Patonia Williams. Shanel was named Ms. Photogenic while Patonia was named Ms. Amity. The show was very exciting and was punctuated by a scintillating performance by the very popular d’Vybz Band.

In first place was Lina Liset Saroza Manso of Cuba, who also won the Best Talent segment while the second runner up spot was Noveecha James of St.Vincent & the Grenadines. The third runner up position went to new comer Bermuda, Miss Alexa Lightbourne.

This is the first time Anguilla has won the crown in the shows twenty-eight year history.

The 2007-08 Soca Monarch is King Konris who won the title with the hit song ‘Walk Away’. Mente of Small Axe and defending Soca Monarch champion Ras Kelly were 1st and 2nd runners-up respectively. However the most memorable performance came from d’Vybz Band’s Shakki who brought the house down with her scintillating performance of her bands big hit ‘Party in Da Streets’.

The other contestants were Tandy Trotz of the Washington Archibald High, Micayan Dore of the Cayon High and Tiffany Pereira of the Verchilds High.

The Inspirer won with a song entitled ‘Down on my knees,’ while the ‘Mighty Junior’ took the first place with ‘Retaining My Crown’

Second place went to the Mighty Al, who sang ‘Questions from a Youth’ while the third place spot went to ‘Singing Shaddy’, who sang ‘Education.’

One of the main highlights of the Carnival season was the 2nd annual Night of the Stars New Years Eve Ball which featured d’Vybz, Small Axe, Ronnie Rascal and DJ Sugar Bowl. D’Vybz gave a truly excitingly memorable performance with the thousands jumping and waving in the New Year with the bands hot carnival tunes DJ Play, My Life, So Wine,Warriors and Party in the Streets.

The band was very well received and played 2 hours of non stop sweet soca and Caribbean music for the thousands at the Bird Rock Beach Hotel. The Small Axe Band was as usual spectacular as they had the massive crowd in attendance in soca frenzy blazing thier big carnival hits Naughty Shorty and In Da Middle. The success of the Ball has resulted in the booking by the events promoters by the same headliners in Small Axe and d’Vybz Band for the 2008-09 edition of the annual event.

The crown was captured by Miss Kibiane Willett; in first place was Yvette Herbert while Lonya Small took the second place. The other contestants were Denise Hodge and Vanessa Francis.

The five big beauties graced the stage with confidence and were no way near embarrassed about their weight. The audience was stunned when the ladies made their swimsuit appearance and gave full support throughout the entire show.

The Miss Big and Beautiful Queen Pageant is expected to be an annual event.

The most popular calypso songs for the carnival season were two politically charged witty compositions, Sucking Labour Breast by Lord Kut and Focus by the Unexpected. Both songs were comical, witty yet hard-hitting jabs at the government

The St.Kitts-Nevis carnival 2007-08 was by no means the best ever but it was certainly a very memorable carnival. The music for this year’s carnival, particularly from the bands was for the most part on a much higher level than in recent years. With songs like DJ Play, My Life, Party in Da Streets and So Wine D’Vybz Band produced what many have termed as the best album for the season mainly due to its distinct universal appeal. Small Axe as well received rave reviews for their 2008 production, in particular the groovy soca hit Naughty Shorty. Other very commendable cds have been produced by calypso monarch King Konris and road march champions Grand Masters. 5 time former road march champions the Sugar Band received mixed reviews for their 2007-08 album, Band A Lion.

The prize giving and awards ceremony will take place on January 19th 2008 when the seasons top bands and performers are expected to collect their awards and perform.