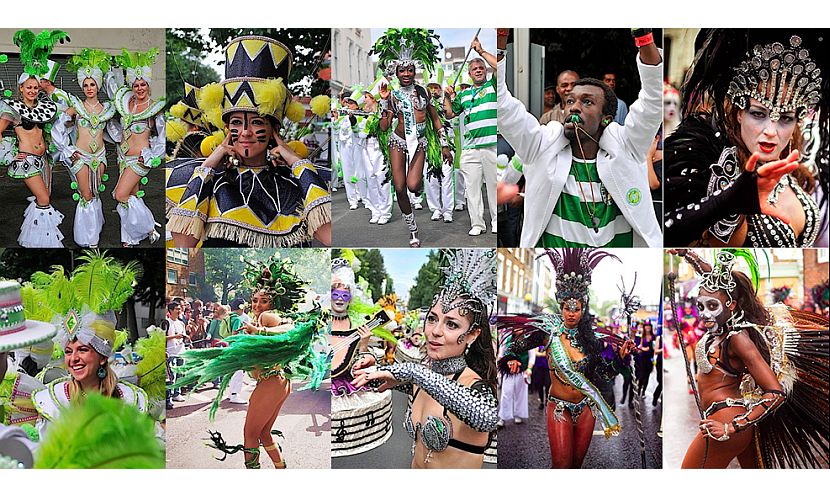 Feathers, sequins, glitter, bikinis, huge spectacular floats and costumes, and the hypnotic sound of brazilian samba drums… The London School of Samba is a bonafide authentic slice of Brazilian carnival buried deep in the heart of Waterloo. Founded 32 years ago, they were the very first Brazilian “Samba School” in the UK. Back in 1984. They played outside the Brazilian embassy and begged for some more drums – today they are one of the biggest costumed parade groups at the Notting Hill Carnival, with over 150 people, 60 samba drummers, 3 floats and 10 themed costume sections, and have seen over 2000 members pass through their doors over the years, bringing the passion, colour, sound and pure intense ecstasy of the Rio Carnival to London. With affiliates and members from all over the world including one of the most famous samba schools in Rio, Mocidade Independente, LSS proves that even though the British public voted for Brexit, the cultural diversity that makes London proud is still alive and kicking…and singing, and dancing!

On Monday 29th August, LSS will be doing something never before seen at the world famous Notting HIll Carnival: their 2016 carnival theme, “Somewhere Under The Rainbow”, will bring together people, cultures and mythology from all across the world to unite them in one enormous colour-coordinated HUMAN RAINBOW. This samba rainbow will parade through the streets of Westbourne Park and Ladbroke Grove amongst the Caribbean Mas bands to the hypnotic sound of Brazilian drums. Considering that the last two years have seen the Notting Hill suffer unprecedented torrential rain, it’s quite a fitting concept! Let’s hope it doesn’t rain on their parade…

This year’s parade will bring the London School of Samba to the Notting Hill Carnival for the 32nd time. Our “bateria” will have drummers from all over the world working hard over the weekend to bring the exhilaration and excitement of Brazilian Carnival to the streets of Notting Hill. Our theme this year will bring something never before seen, with a legion of enthusiastic musicians. It’s going to be one hell of a spectacle – I’m really excited about it! It will will be a big taste of Rio in London.

“I can’t wait to see everyone in their costumes together in their alas, seeing the excitement in people’s faces when we enter the carnival route, the joy, the togetherness, the carnival and community spirit. I think this year’s theme and costumes are absolutely brilliant with all the colour bursts everywhere.”