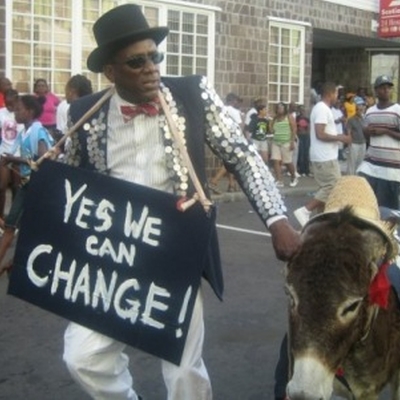 Revellers review of the St.Kitts-Nevis National Carnival 2008-09 by Wallis Wilkin

An obvious road March winner announcement brought the St.Kitts-Nevis National Carnival 2008-09 to a predictable yet very exciting end on last lap January 2nd 2009. The streets of Basseterre were flooded with revelers and mas players jamming to the sounds of various sound systems, dj’s and bands.

The air was filled with the top tunes for Carnival 2008-09 which included Break it off and Party mix by Small Axe, Backshot by Collision, In the Street and Video Light by the Sugar Band, Having a Ball, De Anthem and Like Doves by d’Vybz and Carnival Again and Whaling Season by The Grand Masters Band. These were all very popular carnival tunes and some were contenders for the road March title. Grand Masters’ Whaling Season separated itself from the pack particularly on Carnival day and last lap and out-whaled the competition. Grand Masters Whaling Season was declared the winner for the St.Kitts Carnival Road March title decisively beating other contenders including Kollision Band’s ‘Backshot’ and the Sugar Band’s ‘In the Streets’. This is the band’s 6th Road March title and only the legendary Ellie Matt and the GI’s Brass has more road march titles. The popular Sugar Band has failed to find the road march touch ever since the exodus of band founder and former bandleader Steve Dublin along with Chad Benjamin and Carl Osborne who left to form d’Vybz which this year produced the critically acclaimed ‘Doing it Right’ CD which featured the massive hits ‘Like Doves’ and ‘Having a Ball’

The Digicel Inferno’s’ ‘Roman Rule’ walked away with the title of best troupe, while ‘The True Wonder of Nature’s Exotica’ by Banker Mas Camp and ‘The Sky Is The Limit’ in second and third, respectively. DJ Ronnie Rascals Extreme Jouvert Pirates was adjudged best jouvert troupe.

King Konris became the 1st calypsonian to win 4 straight Calypso Monarch titles. The National Calypso Show was very exciting but as always rife with controversy . Singing ‘Mummy and Daddy’ and ‘Trophy Case’, Maynard tallied 847 points to retain the crown and won the approval of his fans. As usual, his props were good, especially in round two of the competition.

However the first runner-up Singing Jackie seemed to be the crowd favorite. She amassed 798 points as she received huge support and reaction from patrons’ for her renditions ‘Practice tough Love’ and ‘Not in De Criteria’. She was definately favoured to take the title by the majority of fans at the competition .The audience left the venue with mixed emotions on the judges’ decision.

She was followed by the two stalwarts from the sister isle Nevis, Dis N Dat and Astro. The former sang ‘A chance to Shine’ and ‘Decision Time’, and his 757 points were not enough to dethrone Maynard but earned him the Second Runner-up position; while the latter, singing ‘There is still Hope’ and ‘No Difference’, accumulated 747 points to win the Third Runner-up spot, which caused many patrons to wonder what caused the wide margin between him and Maynard.

The four other contestants were: Princess P, who sang ‘Mudda Pressure’ and ‘Death Row’; last year’s Female Calypso Bacchanal winner Queen Anastasia with ‘Just another Day’ and ‘Without my Music’; Lord Kent, who in his second rendition said he travelled from New York after receiving a SOS to be in his native land to make King Konris ‘Stop De Beating’, while his first song was entitled ‘Let’s Appreciate; and Queen Kibbie, who sang ‘Jah Jah in Control’ and ‘Now all that Change’.

Nationals were filled with pride when after a decade in the shadows of other Caribbean countries, St. Kitts once again dominated the Miss Digicel Haynes Smith Caribbean Talented Teen Pageant. The beautiful and intelligent Che-raina Warner of the Sandy Point High School was crowned Queen (Dec. 29) after amassing a total of 737 points whilst capturing the SKNVibes Miss Photogenic award, Best Ambassadorial Wear and Best Evening Wear.

Miss USVI also received the award for Best Talent after performing a dance sprinkled with a great deal of emotion while Best Interview went to Miss Guyana, who strongly advocated that youth empowerment is one of the factors that would assist young people from embracing negative influences.

The other countries that participated were newcomer The Bahamas, along with Anguilla, British Virgin Islands, Grenada, Bermuda and Trinidad and Tobago.

Samantha Boone, a first degree graduate in Business Management from the University of Plattsburg in New York, captured the coveted National Carnival Queen title from a field of six beauties.

The 25-year-old, who was sponsored by the St. Kitts-Nevis-Anguilla National Bank and hails from the village of Old Road, amassed a total of 459 points to win the crown and also captured the Best Swimwear, Best Costume and Evening Wear segments.

Sahira David, Miss Ginseng Up of Sandy Point was the First Runner-up with 418 points. She also won the Best Talent segment while Keys Village beauty Karina Phillips, Miss Lime, followed closely behind with 415 points and won the Best Interview and Miss Photogenic awards.

Berriscia Byron, a Form 3G1 student of BHS was crowned the 2008 Miss UDC Talented Teen and carted off four other prizes during the process. Byron was voted the Most Photogenic while capturing the award for Best Performing Talent with a monologue and dance sequence. Donning a white salmon evening gown, she gained the judges’ nod to win the best Teenage Wear segment and was also adjudged the best in the Personality and Achievement Speeches segment.

The two other contestants, Sherise McKoy and Shion Williams, also gave good account of themselves and the schools they represented, Cayon High and Sandy Point High respectively. McKoy won the Best Onstage Interview segment while Williams received the Miss Amity and Chairman’s awards.

Miss Independent, Kerissa Willett, a friend of Byron and a student of class 5G3 at the BHS, dethroned defending champion, Husani ‘De Inspirer’ Parris to be crowned this year’s National Junior Calypso Queen.

Her victory song, ‘Colours’, pleaded with the audience to cease allowing the use of colours to promote divisiveness in the gang and political arenas.

Parris was awarded the First Runner-up position with ‘Yes we Can’, a piece based on the implications of Obama’s victory, while Alphonso Henry and Rusani Gordon were the Second and Third Runners-up respectively

One of the main highlights of the Carnival season was the 1st annual Champagne and Pearls Ultra Upscale ALL Inclusive fete which featured Kc-5, Ronnie Rascal and d’Vybz. D’Vybz gave a truly excitingly memorable performance with the hundreds of fabulously attired patrons jumped and waved the bands hot carnival tunes Like Dove, Having a Ball, Get on So, De Anthem and Ifound a Woman. The band was very well received and played 2 hours of non stop sweet soca and Caribbean music. The Kc-5 Band was commendable while DJ Ronnie Rascal was as usual spectacular.

DALILA TOTA, the voluptuous beauty from Newtown, outshined her competitors in most segments and was crowned Miss Big and Beautiful 2008/2009.

Five plump beauties, Mericia Murraine, Jennifer Williams, Coreen Rawlins, Tota and Sharon Cannonier, hit the Carnival Village putting their proverbial best foot forward with the hope of convincing the judges of their worthiness of the title.

The Swimwear and Eveningwear segments were of particular interest to the crowd which openly expressed its likes and dislikes for the various pieces.

The most popular calypso songs for the carnival season were two politically charged witty compositions, ‘Who you love you love’ by Neglector and ‘Who can’t hear will feel’ by Thrashrow. Both songs were comical, witty yet hard-hitting jabs at the government. Other Calypso hits were ‘Light Gone Again’ by BIG Edwards, ‘Stop the beating’ by Lord Kent.

The St.Kitts-Nevis carnival 2008-09 was by no means the best ever but it was certainly a very memorable carnival. The music for this year’s carnival, particularly from the bands was for the most part on a much higher level than in recent years. With songs like Having a Ball, Like Doves, Doing it Right and Get on So, D’Vybz Band produced what many have termed as the best album for the season mainly due to its distinct universal appeal. The album is entitled ‘Doing it Right’. Small Axe as well received good reviews for their 2009 production, in particular the groovy soca hits Party Mix and Break it off.

Grand Masters album was likely the best selling with the Road March tune ‘Whaling Season’ was easily the most popular song for the carnival season. 5 time former road march champions the Sugar Band received mixed reviews for their 2008-09 album, Breaking Out. However there songs ‘Video Light’ and ‘In the Streets’ were very popular St.Kitts carnival tunes. The Collision band also produced a very commendable 2008-09 Album which was entitled ‘Elevate’.