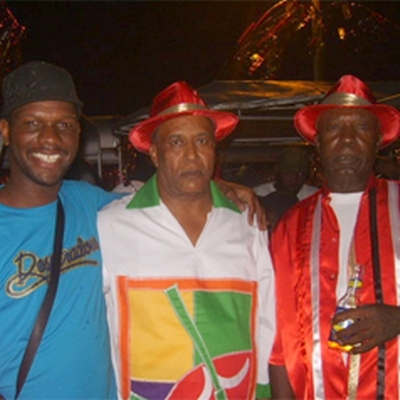 The first time I saw Despers, I was with my brother Norman in 1981. They were performing at the Birmingham Odeon, (as part of their UK tour). The whole audience was transfixed, we were amazed with the standard and sound of the music. Robert Greenidge gave a great performance with Taj Mahal. This was the first time I had seen a steelpan soloist in action. This performance changed my life. I knew there and then that I would become a professional steelpan solo performer.

My brother and I bought the two albums by Desperadoes and Taj Mahal at the end of the show. Once home we began to learn the full musical arrangements including the solos. I recall spending hours upon hours at my parents’ house playing these records over and over trying to work out Robert Greenidge’s pan solos. We also adapted some of the Clive Bradley arrangements for our own Birmingham based Maestro Steel band led by my brother Norman Stewart.

Our passion for the steel pan continued to grow and we started following the Trinidad Steel bands very closely. Even though it was difficult to get audio recordings of the bands we managed to get a few. One of the albums that is still very memorable for me is the great classic ‘Pan In Honey’. The famous tracks many people remember from this album ‘Pan In Harmony’ by Clive Bradley; Despers panorama piece’s like ‘Ah Going and Party Tonight’ arranged by the late Master Arranger Clive Bradley 1982 (sang by Calypsonion Lord Nelson ) and; the monster winning arrangement of Clive Bradley’s ‘Rebecca’ (Sang by Calypsonion ‘Super Blue’ ) that gained Despers another Panorama victory in 1983, most defiantly a true master piece.

1986 was the first year that Norman and I visited Trinidad & Tobago – the land of Pan. This was a great year with the hit song by David Rudder ‘The Hammer’ (this song was dedicated to the late great Rudolph Charles, The General of Desperadoes, who sadly had passed away 1985). Both Desperadoes and Trinidad All Stars played the Hammer that year, but Leon Smooth’s Edward’s arrangement of The Hammer for Neal and Massy Trinidad All Stars swept the whole Savanna and the judges off their feet – gaining another Panorama Victory for Trinidad All Stars.

In 1986 Trinidad All Stars visited England as part of the Caribbean Focus Tour. For their Birmingham show, Maestros Steel band was privileged to be the guest band at the show. That was how I made contact with World Renowned Soloist & Arranger Yohan Popwel. On my return visits to Trinidad I would stay with Yohan; this was like paradise for me because Yohan’s house was central to both bands, All Stars and Despers. We recall late one night when Norman, Yohan and I were sitting outside talking and could hear three of the top bands in the world Desperadoes, Trinidad All Stars, and Renegades practicing – depending on which way the wind was blowing. This was really amazing: to hear the sound of live pan being blown by the wind. That’s why Trinidad is defiantly the home of the Steelband, cause to have three great bands with over 120 members per band rehearsing in the open so close to each other and; no complaints from any of the residents – this really is amazing. The great thing is that Steelband accommodates all the generations of the community; from great grandparents to grandchildren. How many opportunities are there in life for intergenerational activities? Where else can young and old can learn, create and enjoy the same activity and have mutual enjoyment? This provides a positive environment for youngsters and, at the same time, gives a common goal to work towards.

Almost 20 years later, 2009 I am in Trinidad again, travelling with my brother Norman and friends from the UK. Norman played, Double Seconds with the Desperadoes Steel Orchestra – a long awaited dream come true. Most of my time, I spent with Desperadoes. It seemed that anywhere I went I ended back with Desperadoes. Robert Greenidge’s arrangement of ‘Pan Redemption’ was great, and the band was welcoming and full of love. It was a real pleasure to be with the band for the whole season. The amount of dedication that is put into perfecting the music can only be described as pure love and commitment . The rehearsal started at around 7pm and finished round about 3am the following morning. This was the regime every night for the two weeks we were there. What is even more amazing is that the players are so accustomed to the Carnival practice routine they still got up to go to work and school and made it in on time!

The Pan Yard vibes was great with food and drinks served all night, with of course sweet, sweet pan music. Every player and section of the band was tested on how well they knew the music and only the best were chosen for the final night’s performance. This was quite a hard job for the management and section leaders. In total there was about 180 members all working hard to make the final performance, but the band could only have a maximum of 100 players on final night.

2009 was also a great pleasure to witness Yohan Popwell gain another Panorama victory in the Medium category with his band Clico Sforzata. Jamma & Norman would like to thank the Management team and entire family of Desperadoes for making Carnival 2009 such a great experience, and of course not forgetting our wonderful host Yohan Popwell and Family.