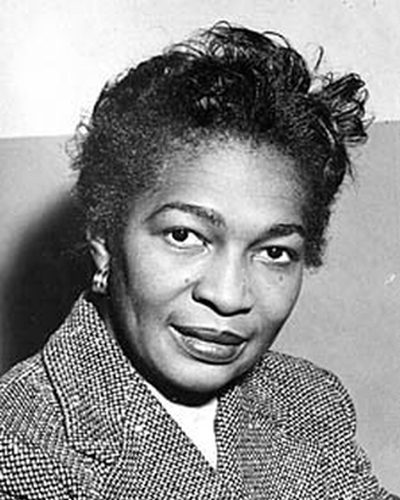 Claudia Jones is at last claiming her place in history. In 2004 the Notting Hill Carnival celebrated 40 years on the streets of London. The annual spectacle now draws hundreds of thousands of locals, visitors and tourists to the streets of West London. In the 21st Century London’s Carnival has emerged as one of the world’s largest and most popular street festivals.

Respect is due. The pioneers of the London Carnival were many and diverse. Some were organisers, some community leaders. Others were musicians – panists who brought their home grown skills to the streets of Britain in the days of ‘Pan-round-the-neck’. For three successive decades the spectacle grew in magnitude, attracting a plethora of mas bands, sound systems, vendors, and revellers from all corners of the earth. By the ‘90’s despite its many critics, Carnival had peaked, establishing an explosive, exuberant presence on the same streets that had witnessed race riots in the late 1950’s and early 1960’s.

Perhaps this is the clue to Claudia Jones’s role in the evolution of Carnival. Deported from America in the mid 1950’s Claudia was sent to Britain, rather than to her native Trinidad where she had lived the first 8 years of her life. As Marcus Garvey before her, she had become a thorn in the side of the American Establishment. Her non stop advocacy for Human rights, her prominence in a range of organisations that challenged inequality in the status quo (and particularly her membership of the Communist Party) made her ‘a live and present danger’ to the American state. They had to get rid of her. She was threatened, harassed, spied upon. The FBI kept her in their sights. They had an active file throughout the ‘50’s. In 1954 she was charged and found guilty of ‘un American activities’. After a year’s imprisonment she was deported to England, the Mother Country of the colonized West Indian people.

Claudia arrived here ill, dejected and penniless. Yet within a few years she had rallied around her a range of activists and talents who supported her career as a freedom fighter in England – the likes of Amy Ashwood Garvey, Pearl Prescod, Nadia Cattouse, Beryl Macburnie, Trevor Carter, and her life long friend and mentor Paul Robeson.

Her experience in America had taught her that a people without a voice were as lambs to the slaughter. Her brainchild, the West Indian Gazette (1958-65) was a key contributor to the rise in Consciousness within the Black community. She lobbied tirelessly against an Immigration Act that effectively relegated Britain’s colonial populace to second class citizenship. An uncompromising agitator, she campaigned against racism in housing, education and employment. She addressed peace rallies and Trade Union congresses with equal fluency. She visited Russia, Japan, and China where she met with MaoTse Tung – all this, will suffering the pangs of ill health. Compounded by exile – both from the land of her birth and from her adopted country, America where she had lived for most of her life.

The first indoor Carnival, held at the St Pancreas Town Hall in January 1959, was a masterstroke of Claudia’s genius. Always aware of the power of Art and Culture to influence change, Claudia sought to reverse the disesteem, loneliness and alienation of Black people in Britain, people like herself who time and circumstance had washed up on foreign shores, far from their roots and origins.

In her childhood in Trinidad she had seen the power of Carnival to knit the many strands of a hugely diverse society in mass celebration. Here in England Carnival could become a double edged sword, redeeming the pride of Black immigrants, while extending the hand of friendship to a ‘stiff necked people’, uneducated and misinformed about the culture of the darker races. As in its Caribbean roots, Carnival would embrace protest within Celebration, and replace conflict with understanding. It would express liberty and equality through its rituals of masquerade. Hers was a deeply humanising mission.

The debate as to who initiated Carnival goes on. But claim and counter claim can never be resolved. The birth of all Carnival is organic – a natural evolution of people’s culture, responding to place, time, history and circumstance. The carnival belongs to the people. It reflects our common creativity, skills, tradition, and culture. It is a rich and free heritage that is now shared with Britain and internationally.

What is certain is that Claudia Jones was a pivotal mover of Carnival in Britain. She linked politics to art and culture in a strategy that embraced and involved the widest majority. Her greatest asset was her selflessness and unstinting devotion to the cause of the underdog. She was a humanitarian with a great heart. She deserves the place she has found in the hearts of the community.