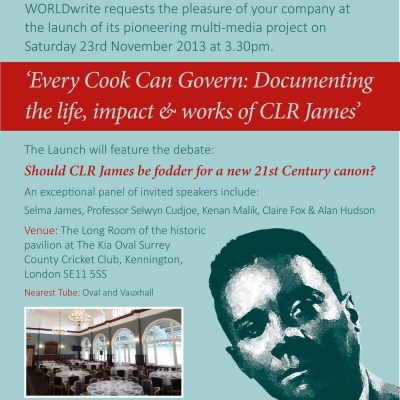 Every Cook Can Govern: Documenting the life, impact & works of CLR James

Launch debate: Should CLR James be fodder for a new 21st Century canon? Discussion of the literary canon has hit the headlines this year and Gove’s new syllabus proposals have provoked near hysteria.

2013 also marks the respective 50th and 70th anniversaries of the publication of CLR James’ seminal works Beyond a Boundary and Black Jacobins. In all, what better moment to reflect on the whole idea of a canon and whether the works of a revolutionary writer like CLR James should be included.

Unlike many black intellectuals growing up in the colonies, James was positive about his education and did not reject or scorn the contributions of classical and Western culture to world civilisation. “I denounce European colonialism”, wrote CLR James, “but I respect the learning and profound discoveries of Western civilisation.” He also famously wrote: “I, a man of the Caribbean, have found that it is in the study of Western literature, Western philosophy and Western history that I have found out the things that I have found out, even about the underdeveloped countries”.

Today, James’ support for enlightenment universalism and defence of Western civilisation would probably be dismissed as Eurocentric, even racist, but are such criticisms valid? James himself suggested what amounts to a ‘canon’ of great writing from Aeschylus to Shakespeare to Melville to Césaire, but is the very idea of a canon too exclusive or elitist? Should James’ works be ‘on the list’ because he is black, a Trinidadian or because of the inspiration they provide? Would including James’ work mean conceding there is a problem with the DWEM (dead white European male) nature of the traditional canon as its detractors suggest?

To debate these questions and more the education charity WORLDwrite and its Citizen TV station WORLDbytes are delighted to host this event which will also form the launch of its multi-media project on CLR James. The project, comprising a knowledge portal, feature documentary, archive workshops, live-streamed debates and read-a-thons is supported by the Heritage Lottery Fund, Esmée Fairbairn Foundation and Trust for London. Project partners include the British Library, Museum of London, George Padmore Institute and People’s History Museum.

As James’ work Beyond a Boundary is already recognised as key in the ‘Cricket canon’ there could be no better place to host this event than in the long room in the historic pavilion at the Oval. Invited speakers include:

• Selma James is a women’s rights anti-capitalist campaigner. Recent publications include Sex, Race and Class: The perspective of Winning (2012). Selma was CLR James’ colleague and wife for over 35 years.

• Kenan Malik, writer, lecturer and broadcaster, author of acclaimed books including: From Fatwa to Jihad: The Rushdie Affair and its Legacy; Strange Fruit: Why Both Sides are Wrong in the Race Debate & The Meaning of Race: Race History and Culture in Western Society.

Tickets cost £10/£5 for this event and as spaces are limited, it is wise to book as soon as possible.
Tickets can be booked online