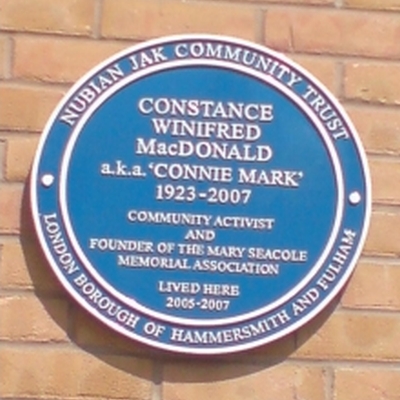 To date the charity has unveiled plaques to Bob Marley, Mary Seacole, and Ignatius Sancho as well as at the Foreign Office and the University of London.

A commemorative blue plaque in honour of community activist Connie Mark MBE, was installed by the Nubian Jak Community Trust, in association with Care UK and the London Borough of Hammersmith & Fulham, at Mary Seacole House in Hammersmith where Connie used to be a resident.

The plaque was unveiled on 30th June at 2pm as part of the Borough’s Windrush Season.

In remembrance of some of the pioneering work Connie did, among those attending the unveiling were Jamaican High Commissioner to the UK, His Excellency The Honorable Burchall Whiteman MP, Shirley Graham-Paul (co-founder of the Mary Seacole Memorial Association), Amru Mark (daughter of the late Connie Mark) and Mayor of Hammersmith & Fulham, His Worship Andrew Johnson.

Mrs. Mark came to Britain in 1954 after working as a medical secretary for the British Army Medical Corps in Jamaica. As well as her pioneering work and contribution in highlighting Caribbean culture in post war Britain, she was also patron for a number of organisations including founding the Friends of Mary Seacole – later known as the Mary Seacole Memorial Association.

She was awarded an MBE on the Queen’s honor’s list in 2001 and remained active until her death on 3 June 2007. She was married twice and had two children from her first marriage.