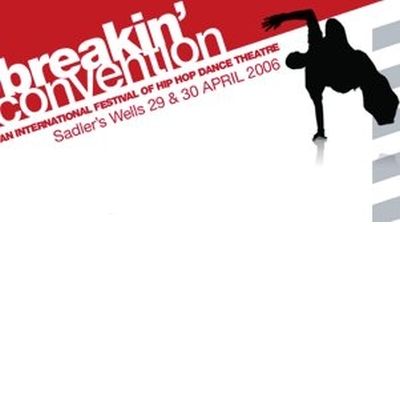 Sadler’s Wells unites some of the world’s finest poppers, lockers, b-boys and b-girls for the third annual Hip Hop festival on Saturday 29 and Sunday 30 April 2006. For one weekend, Breakin’ Convention 06 showcases international talents from the UK, France, Switzerland, Korea, Brazil and beyond. Breakin’ Convention 06 builds on the success of the past two years’ festivals, presenting performances and workshops throughout the weekend.

South Bank Show award nominee and curator of Breakin’ Convention Jonzi D says "I want to get a lot more people into the theatre. And if you saw Breakin’ Convention at Sadler’s Wells, that’s what we did. I’m not interested in changing what I do for the existing audience; I would rather take the exciting, vibrant and kinetic culture that is Hip Hop and bring that to the theatre."

Breakin’ Convention supports both international cutting edge crews and UK groups beginning their artistic careers. Last year’s debut crews, Impact Dance and ZooNation perform for the first time at the Peacock Theatre in their own right in February and the youth groups programme at this year’s festival includes brand new work from Essex based crew Karizma, winners of the January 06 Jump Off crew battle, and the Holloway Boyz returning with new work for their third consecutive year.

Jonzi D is the Artistic Director of Jonzi D Productions, which became a Sadler’s Wells Associate Company in residence in May 2005. He is nominated for this year’s South Bank Show, Arts Council England decibel award for Breakin’ Convention with Sadler’s Wells. He has been actively involved in British Hip Hop culture, rapping and b-boying in clubs and on the street since its genesis in the early eighties. He has been committed to the development of Hip Hop dance theatre since graduating from London Contemporary Dance School in 1992. His creations Lyrikal Fearta in 1995, and Aeroplane Man in 1999 were both highly acclaimed.

Jonzi D has had two of his short films screened on Channel 4 and has also featured on Channel 4’s Faking It. In 1995 he was creative consultant on a South Bank Show special documenting the art and culture of Hip Hop. He presented the 4Dance: DANCE 4 FILM programme on 29 December 2005 on Channel 4.

"….Hop is here to stay. With its thrilling physicality, head-spinning virtuosity, rhythmic panache, dazzling mimetic skill and sheer sense of fun, it’s the most original dance form in years, and it’s determined to set the stage on fire." The Times

For the latest information on the festival please visit www.breakinconvention.com

Jonzi D
After graduating from The London Contemporary Dance School in 1992, his career began with performances in Tel Aviv and at Jacob’s Pillow in Massachusetts. As an MC and poet, Jonzi’s collaborators include The Roots, MC Mell’o’, DJ Pogo, The Young Disciples, Courtney Pine and Lenny Henry. His TV credits include The South Bank Show’s “Looking for the Perfect Beat”, and “Different Voices”, part of the ‘Ba Ba Zee’, Channel 4.
Jonzi has performed his work all over Europe, Southern Africa and America, and has devised educational programs for youth centres, prisons and schools. He has been commissioned to create work with Phoenix Dance Theatre, Soweto Dance Theatre and for the “40 Degrees” fashion show at Earls Court. His critically-acclaimed solo show Aeroplane Man is a unique fusion of rhyme, lyrically-motivated movement from classical and modern black dance forms, and live break beats.