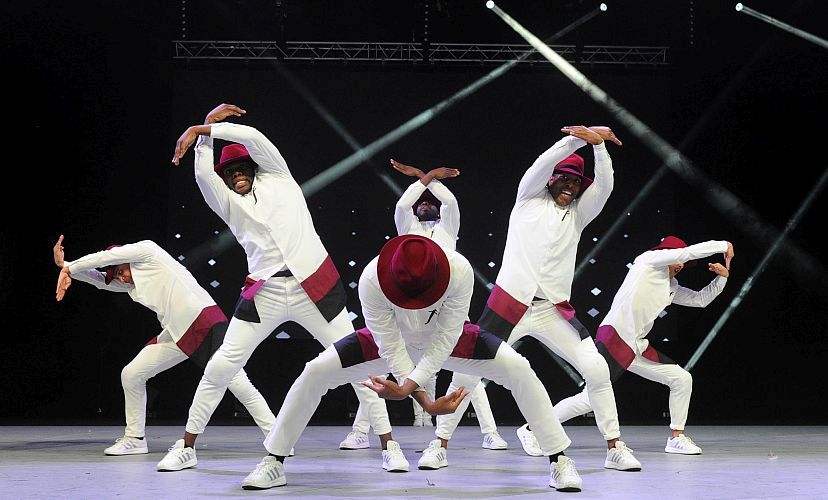 “High marks to Jonzi D, artistic director of the annual festival, and to Sadler’s Wells for continuing to provide a platform for such an astonishing spread of work on both the main stage and in the more intimate Lilian Baylis Studio” The Times

Sadler’s Wells’ critically acclaimed international festival of hip hop dance theatre, Breakin’ Convention, is back, with performances from UK and international companies and crews. Now in its 13th year, this hugely popular Sadler’s Wells Project is once again hosted and curated by Associate Artist Jonzi D. Following the annual festival at Sadler’s Wells over the May bank holiday, Breakin’ Convention will then tour to eight venues across the UK throughout May until Wednesday 1 June 2016.

Breakin’ Convention has firmly established itself as one of the major highlights on the British dance calendar and one of the world’s greatest celebrations of hip hop culture.

Friday 29 April features a work in progress sharing of Vicycle by Birdgang Dance Company in the Lilian Baylis Studio. Revolving around the inner struggles of ambition, addiction and grief. The piece follows one man’s pursuit of an ‘ideal’ and the compromises he is willing to make to reach it. In its first incarnation, the piece appeared at Breakin’ Convention in 2013. The work will be developed as part of Breakin’ Convention’s long-term vision of supporting, commissioning and producing new hip hop theatre.

The bank holiday line-up includes three international acts who were highlights of last year’s festival including France’s Antoinette Gomis, who presents Images, an atmospheric solo inspired by the music of Nina Simone and Civil Rights. Antoinette’s signature style originates from her background as a founder member of the all-female Zamounda crew from Paris. Spain’s award-winning Iron Skulls Co. presents the surreal Sinestesia – A dynamic work where these skilled dancers morph into post-apocalyptic survivors. World Champion b-boy crew The Ruggeds from Holland will perform the high octane Adrenaline, last seen at Breakin’ Convention in 2015.

The UK line-up also features World Street Dance Champions and Britain’s Got Talent finalists Flawless return to the Sadler’s Wells stage for the first time since their last appearance in 2008. They are joined by a number of London-based acts, including hip hop dance crew Myself UK Dance Company. Dancer and choreographer Kloe Dean formed the all-female ensemble in 2008 to promote empowerment, ambition and individuality through the medium of hip hop dance. Kwame Asafo-Adjei returns to the festival with his company Spoken Movement. The group uses elements of street dance and abstract choreography to provoke a guttural reaction. They are joined by Pro-Motion, a supergroup of poppers featuring members of street dance troupes Flawless and Plague.

Many acts in the 2016 line-up developed work as part of Breakin’ Convention initiatives Open Art Surgery and Back To The Lab.

For the fourth year running Breakin’ Convention takes it back to the roots of hip hop on bank holiday Monday 2 May with Park Jam, an outdoor party suitable for all the family in Spa Fields Park.

Flawless – The stars of Britain’s Got Talent and the Street Dance movies return to Breakin’ Convention for the first time since their last appearance in 2008. Since their rise to fame, the ten-strong dance act has performed at the Queen’s Diamond Jubilee concert with Kylie Minogue and appeared in music videos with Madonna, Beyoncé and Leona Lewis.

The Locksmiths – Dancer and choreographer Mr Ben presents an ensemble performance with a line up of London lockers. Mr Ben has previously trained with legendary dancers such as Suga Pop, Greg Campbellock Jr, Tony GoGo and Popin Pete.

Pro-Motion – Prepare to be blown away by the UK’s supergroup of powerful poppers. With intricate illusions and intense technicality, Pro-Motion stars dancers from Plague, Flawless, and the UK’s newest generation of poppers.

Protocol Dance Company – Formed in 2008 by choreographers Jared Garfield and Lanre Malaolu, Protocol’s foundation of movement stems from a wide range of styles such as hip hop, popping and krump. The group performs I Can’t Breathe, an intense exploration of modern day race relations, developed at Breakin’ Convention’s Back To The Lab.

SWNSNG – Mixing images of inner city grit, grime music and krump dancing, this is a dystopian take on Lord of the Flies by Birdgang member and Breakin’ Convention regular Ivan Blackstock entitled Lord of the Trap Flyz.

Antoinette Gomis (France) – Original member of the sassy Zamounda crew Antoinette Gomis returns with a poignant and powerful tribute to the words of a Waring Cuney poem and the powerful message of Nina Simone. Incorporating waacking and house dance to celebrate the SHE-roes that fought for civil rights.

Bandidas (France) – All female popping crew showcase their prowess and electrifying abilities. The group makes their festival debut, performing for the first time in the UK.

BBoyizm (Canada) – Reigning from Canada, B-Boy Crazy Smooth’s crew invites the audience into the world of a practice jam that exemplifies the foundations of breaking culture at its rawest.

Enfants Prodiges (France) – Witness the next generation of France’s leading hip hop dancers with this supercrew made up of Wanted Posse, Bad-Trip, Serial Stepperz and Pro-Phenomen dancers.

Soweto Skeleton Movers (South Africa) – Straight from the street and on to the stage, South Africa’s pantsula dancers dazzle with street performances and astounding tricks.

Acts in this year’s Studio line-up:

Far From The Norm – A collective of individuals established in 2009, striving to break boundaries and challenge audiences by portraying hip hop in a dynamic and abstract way. Botis Seva’s kung-fu inspired duet will astound audiences with sharp wing chun movement and intense focus in a classic master and apprentice face off. Previously seen at Sadler’s Wells as part of its Wild Card season.

House of Absolute – An ensemble of waacking warrior queens take to the stage with the live vocals of Lula Mebrahtu.

Spoken Movement – Kwame Asafo-Adjei returns to the festival with his company Spoken Movement. The group uses elements of street dance and abstract choreography, exploring the mental state of a girl reminiscing a taboo family subject in Family Honour. The group were last seen at Breakin’ Convention in 2014.