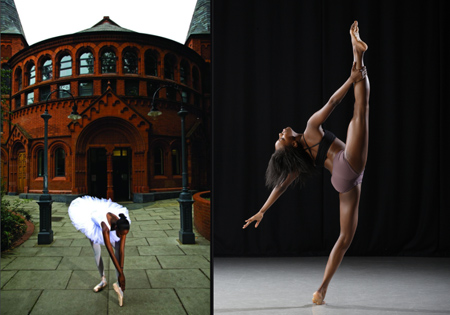 Classically British is unique in celebrating our rich cultural mix, by showcasing ethnic minority British dancers and choreographers in modern and classical ballet. It creates a platform for choreographers and dancers to express their cultures through the language of dance.

This year’s special performances will feature dancers from a classically trained background, such as schools of the Royal Ballet and Ballet Rambert, as well as guests from the commercial mainstream. The event includes neo-classical ballet set to music as diverse as classical, pop, r’n’b, hip-hop, ambient and techno. Senior Students from Portobello Dance will join those who have broken through the barriers of traditional dance in this country and are returning to join in the celebrations and to inspire the talent of the future. One such talent, Kym Alexander, has now been offered and accepted an apprenticeship with Ballet Rambert Company.

“I am very excited to be part of Classically British for the third year running, and on its fantastic 10 year anniversary. I believe it is a fantastic event for young kids, to inspire the next generation to get kids thinking dance is a cool thing and being classically trained is also cool now. All the TV shows that are out now show that it is very in to be dancing. It is also important at the moment to show the kids different styles of dancing. Hopefully it will encourage the kids to take up ballet classes. Happy Classically British.” Layton Williams, who played the title role in Billy Elliot the Musical at the Victoria Palace Theatre

The event will feature 2 short Films, Photographic Exhibition, Q&A session and Live Performance. The short film, ‘Classically British’ directed by Dennis Alexander, showcases the history of the project and gives a historical account of the rise of Black & Asian Classical ballet dancers in the UK and a tribute to the dancers and artists that have been a part of Classically British for the last 10 years.

The show is part of a life-long ambition and creative vision of Mark Elie, Artistic Director of Portobello Dance and Producer of Classically British, who has been committed to promoting the careers of British dancers of ethnic origin. He trained at Ballet Rambert and Dance Theatre of Harlem, leading to a dance career including Ballet Gulbenkian, Arlene Phillips’ Hot Gossip, numerous West End shows, and TV appearances. Now in its 18th year, Portobello Dance continues to give children from ethnic minorities and low-income families the opportunity to realise their dreams of becoming professional dancers.

Portobello Dance, a registered charity, has no core funding, and has relied totally on the support of friends, professional dance teachers, and an encouraging board of directors, who have all contributed financial and otherwise. There have been many benefactors over the years who have been enticed by Mark’s dynamism, strength of vision and character needed for Classically British to have reached its tenth year.

As part of the Black History Season, Portobello Dance is running an interactive afternoon event as part of our ‘Classically British’ programme. Dress rehearsal – doors 12.30pm (show 1.30pm), tickets £5 at the door

This is a chance to interact with the dancers themselves. Portobello Dance Artistic Director and Choreographer, Mark Elie, will also take questions from the audience about the evening’s event.