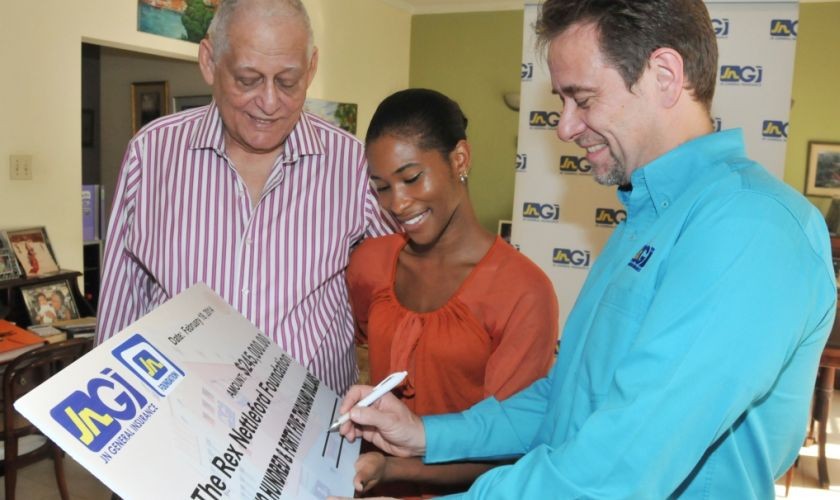 Pursing a double major degree in Computer Science and Dance might seem impossible at first glance. However, Juett Carty, the 2014 JNGI Rex Nettleford Scholarship Dance Scholarship recipient, has found a way to pursue her passion.

Juett, 24, is completing a Bachelor of Arts in Dance Education at the Edna Manley College of the Visual and Performing Arts in Jamaica. This is being done jointly with a degree in Computer Science, being pursued at The University of the West Indies, Mona. She is the first student to have combined these subjects; but then, she is accustomed to following her own path.

“I was a bit of a tomboy while growing up in Mandeville, but I was also interested in the arts,” she relates. “I did drama and singing, which is the direction my mother, Yvonne, would have preferred me to take.”

She credits the influence of her brother Bolivar, who was involved in dance through the Davyton United Church, and who later started his own dance group, as having a formative influence on her life. She, along with her sister Karlia, followed naturally in his footsteps.

The DeCarteret College student also played the flute and did speech performances in her spare time. But above all, she wanted to dance.

“When Rex Nettleford was on television doing a performance, my dad would call me; and I would be locked to the screen until it was finished. I would not do anything else,” the dancer recalls.

But in addition to those interests, Juett enjoyed spending time with her father, Melbourne Carty, when he was fixing his car. “I was keen on technology. I wanted to understand how the devices in my home worked and tried to take them apart.”

“In my circle of friends, there was a craze about Nokia phones. I was fascinated and wanted to know how they were made and how they got games on the device.” It was this interest in phones which led her to do computer programming when she reached sixth form.

There, she wrote a simple book location programme for libraries which actually worked. She declares, “I knew right then that computer technology was what I wanted to do.”

She applied to do a degree in Computer Science at The UWI, and then looked at the options for following her love for dance.

“I knew that these were the two things I wanted to do,” she says. “Initially I wasn’t sure how I could find a link; but, I was determined to find the way to follow both my passions and combine them.”

The opportunity only emerged when she became a member of The UWI Dance Society, and through her own research, realised that such a double major, linking with the dance programme at the Edna Manley College, could be created. She then had to get acceptance into the Edna Manley College, and have them request permission for her to pursue the joint programme with The UWI.

“I had to go out of my way to discover this opportunity,” she states. “There were easier options, but choosing this path drove me to work harder.”

Juett also had to overcome the logistical difficulties of attending classes on two campuses, which required tight scheduling. And…. she had to dance.

“At my age, 24, dance at this level can be challenging, as certain techniques and postures are easier for someone who starts formal training earlier. A young child is able to get a better turnout than I can as my bones are already set.”

She explains that it is a lot of work, but fortunately she acquired some level of flexibility from doing gymnastics earlier.

“What inspires me to go on,” she says, “is a story I read, about a young girl who was bed-bound, but in her mind, she thinks of herself as a ballerina choreographing dances. And, I felt that I would like to use my skills to develop the tools for her to choreograph a dance piece from her bed, and share it with others.”

“Dance is something you do in your mind as well as in your body. Anyone can dance, despite their physical limitations,” she says. “You can simply sit in your seat and rock. That is dancing.”

The skills she has acquired in programming, software research and testing, troubleshooting, as well as camera configuration, provide the basis for hers optimism, that she can play a role in helping people to express their mental concepts to the wider public, through the direct use of technology.

Juett Carty aims to take on this new challenge, following her double graduations when she completes her programme later this year.

“The JNGI Rex Nettleford Dance Scholarship helped me to follow my dream,” she adds. “I want to make the best of this unique opportunity.”