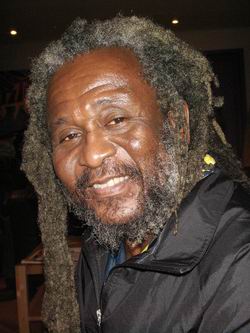 Ras Daniel’s self-healing remedies and ‘comfortable medicine’ are a blend of African, Native American and Eastern traditions. Ras Daniel will share his special knowledge and practice with community groups in Britain. This is a must for those interested in natural, herbal and holistic healing!

People say: “I’m too busy to eat well.” How can they say that when the very food they eat determines how well they can live?” asks Ras Daniel Babu, practitioner of Eastern medicine and reggae producer living in Tokyo. Dreadlocked, wearing his signature colourful tropical shirt, Babu speaks energetically about his involvement with Eastern medicine and roots reggae. Taking to heart the words of Bob Marley: “Open your eyes and look within”, this son of Jah has now made Eastern healing his life.

Babu was born and grew up in the Caribbean community in Brooklyn, New York, a microcosm of the Caribbean with “more Jamaicans than in Kingston, more Trinidadians than Port of Spain, and more Haitians than in Port-au-Prince”. Given his background, reggae music, with its message of peace and harmony, played an influential part of Babu’s formative years, and Caribbean music and culture are still important in the 50-plus-year-oldís philosophy.

Prior to coming to Japan, Babu worked in New York as a promoter and producer of roots reggae for 15 years. He worked for SBO, Sound of Brazil, the largest world music club in New York, and also for Island Records, the label that put Bob Marley on the world music map. Babu has also worked with such stars as Burning Spear, Augustus Pablo and Ras Michael. In the late 1980ís and early 1990’s Babu helped organise the first US showcase of reggae in Japan, and also helped release Rita Marley’s album to CBS Sony in Japan.

It was music that first brought Babu to Japan. He came to Tokyo ten years ago with the intention of staying only a few weeks to scout some Japanese reggae talent. An encounter with Kai Igaku or so-called ‘Comfortable Medicine’, however, changed his plans permanently. “Studying this method at this clinic is the single thing that has had the most profound effect on my lifeís work,” Babu explained. “In a sense it brought everything together”

Babu, who had been studying Caribbean herbal medicine and macrobiotics for years went on to study at Dr Ryosuke Uryuís clinic for three years as an intern, and now works as a practitioner himself.

‘Comfortable medicine’ is based on the premise that the body has the ability to restore itself. Uryu combined several methods of Eastern and traditional medicine to create his own therapy, which includes practices such as evaluating imbalances in the body, sotai, a system of exercise designed to restore health, and a combination of traditional herbal medicines. The clinic has built a reputation in recent years by treating patients for whom conventional Western medicines seemed to offer little help.

“When people hear the word ‘natural’ food or ‘health’ food they tend to think it’s restrictive; but it’s broad and actually opens up a lot of possibilities in other aspects of life”, explained Babu. For Babu a primary interest in dietary systems broadened to a wider study of alternative medicines. “Nothing in the body is isolated”, says Babu, explaining the Eastern approach to the body. “Nerves, hormones, immune system, digestive organs – they are all integrated parts of the human mechanism. So every disease and its symptoms are connected with other parts of the body and the mind of man. From a common cold to cancer, it’s the same.”

Babu’s interest in this holistic approach to health, led him into the study of ‘anti-oxidant nutrition’. Developed by practitioners of Western medicine, this technique teaches us how to counter the effects of pollution, stress and to some extent ageing, as well as strengthening the body’s immune system.

He cites stress, under-nourishment and use of chemicals, including illegal and legal drugs – such as antibiotics, as some of the prime examples of such immuno-suppressants. Malnutrition is one factor contributing to the weakening of the immune system, and many people in developed countries suffer because of their poor dietary habits, says Babu.

In Japan, for example, despite the traditionally healthy diet, the people have been suffering from the same or more adverse effects of fast-food culture and the negative aspects of the Western diet. Instant foods, in particular, come under attack from Babu.

“These instant foods not only have little nutritional value, but also contain a lot of additives that are harmful to our bodies. Japan has good traditional foods such as natto, which is a great source of protein and contains health bacteria similar to that in yoghurt; seaweed, which has lots of minerals and a cleansing effect, and it’s a shame people are abandoning such a rich dietary culture.” Blending his own culture with Eastern medicine studies, Babu has found similarities between macrobiotics, traditional medicine and Rastafari. Primarily vegetarian, Rastafari try to live in harmony with nature, avoiding artificial additives in their diet. Rastafari also emphasises caring for others, especially the under-privileged, the sick and the elderly.

“Knowledge should be shared,” declares Babu. And in Kai Igaku, it appears, Babu has found the perfect vehicle for blending the Rastafari way with eastern medicine, not just for himself, but to bring a healthy message to others.

(Article by Takaesu. Reprinted from Asahi Evening News) Footnote: Ras Daniel Babu is also known to the London Rastafari community where he has given free demonstration lectures and surgeries in self- healing.

Ras DANIEL BABU healer and diet specialist based in Japan, will be in London in July 2007