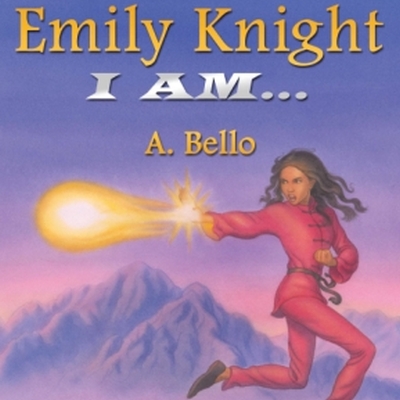 Fantasy Fiction Emily Knight I AM… for 9-15 year olds

An inspirational, moving and laugh-out-loud fantasy fiction for 9-15 year olds written by a peer rather than a parent.

Meet Emily Knight I AM… a gritty fantasy fiction first created by a 12-year-old girl, a book that has been perfected and finally published 12 years later.

Author A. Bello is a lady with big ambitions: she plans to write more books than Jacqueline Wilson and become equally as recognised!

A. Bello wrote the first in the Emily Knight… saga with the intention of filling a “gaping hole in children’s fiction for an inspirational, strong, black female protagonist (a warrior who can fight like a man!)”. Finally, Emily Knight I AM… is available to buy as a paperback and e-book and already proving incredibly popular with parents and teachers looking for a way to address the many questions facing children and teenagers today.

The front cover illustration, by Giles Greenfield (who also illustrated JK Rowling’s Harry Potter and the Goblet of Fire book cover design), has attracted a lot of praise for standing out in a market dominated by ‘mainstream’ images aimed at a teenage audience. The story is strongly appealing to fans of JK Rowling, Twilight, The Hunger Games, Jacqueline Wilson and Malorie Blackman.

Now aged 24, London-born author, A. Bello, (also a professional street dancer), says: “I wanted to write a book based on a strong, female lead character, as I feel this is lacking in children’s fantasy books. Even my main baddie, Neci, is female. It was also important to make the characters diverse, as books tend to feature mainly white characters and growing up there weren’t any characters like me who I could look up to in terms of race. I love Dragon Ball Z, Anime, Marvel and I’m obsessed with the idea of being superhuman! I also wanted the book to be real and gritty; for the characters to be complex, as well as writing something that is laugh-out-loud funny! The story also shows another side of fame”.

Emily Knight, 13, lives with her godparents and their four foster children, she’s a ‘celebrity child’ who tries to juggle friendships, family relationships and life at the Osaki Training School, as well as control her anger and emotions, especially when her superpowers take control. She learns to fly, breathe water and play ‘Dojo’, while regularly getting into trouble in an attempt to gain attention from her father.