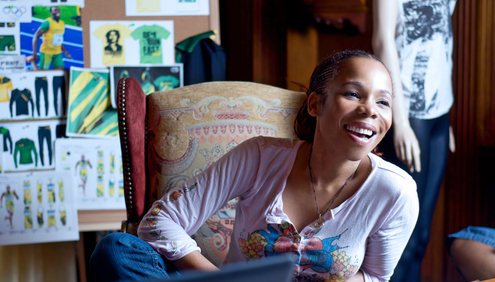 On the week of the late Jamaican reggae icon Bob Marley’s birthday, the fastest man in the world Usain Bolt shares his excitement about reggae royalty, Cedella Marley’s plans to design the PUMA Jamaican Track and Field team’s Olympic, podium and ceremony wear for the London 2012 Olympic Games.

The designs will be worn by the entire team, including three-time Jamaican Olympic gold medallist and fastest man in the world Usain Bolt – with Bolt endorsing the decision, saying that he can’t think of a better person to design Jamaica’s Olympic outfits than Cedella.

The collection will incorporate high tech fabrics and silhouettes engineered to enhance the performance of all the athletes. Cedella Marley’s unique designs have taken inspiration from the vibrant colours and patterns of Jamaica as well as its African roots, and are sure to make the world take notice in the Summer of 2012 – when the world will be watching Bolt in London to see if he will break his own record in the 100m and 200m.

A track runner in high school herself and huge fan of Jamaican athletics, Cedella says her role in creating the Olympic outfits for her home team and home team is an unbelievable honour and something she never dreamed would be possible.

Cedella Marley began designing clothes while she was on tour with Ziggy Marley and the Melody Makers, a band comprised of her brothers and sisters. Her fashion brand, Catch A Fire, named after her father’s first album, debuted in 2001 and encompasses a tailored bohemian style with vivid colors and prints.

Her collections are available in upscale department stores throughout the United States. In addition to fashion design, Marley is a children’s book author and the CEO of Tuff Gong International-the record label founded by father Bob Marley in 1965.

She is also the director of Marley and Company which manages Bob’s image and music rights and helms the merchandising conglomerate The House of Marley. A life-long philanthropist, Marley is currently overseeing operations for The Bob Marley Foundation and 1Love.org.