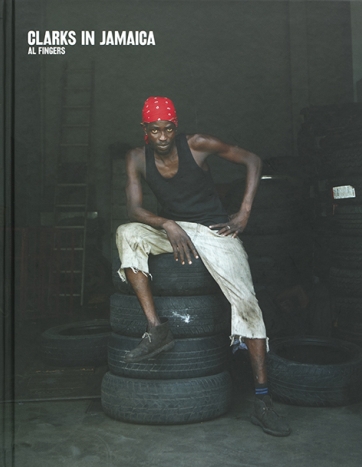 How did footwear made by a Quaker firm in the quiet English village of Street, Somerset, become the ‘baddest’ shoes in Jamaica?

Clarks in Jamaica is the latest book by DJ and designer Al Fingers, providing a colourful take on Clarks’ celebrated status on the island, where for decades they have ruled as the ‘champion shoes’.

Due for release by One Love Books in November 2012, this previously unseen style reference tells the story of Clarks in Jamaica – from their arrival in the West indies one hundred years ago, through to their adoption as the rudeboy and Rasta shoe of choice during the 1960s, and the filtering of this popularity into reggae and dancehall song lyrics.

Featuring current and historic photographs, interviews and never-before-seen archival material, there is particular focus on the Jamaican singers, producers and musicians who have cherished and sung about Clarks shoes throughout the years.

On the creation of the book Al Fingers says: “Being from England, I have always been intrigued by the Jamaican fascination with Clarks shoes and the way they are continually referenced within Jamaican music.

Vybz Kartel’s song ‘Clarks’ brought the phenomenon to many people’s attention in 2010, but the relationship goes back way further, and in compiling this book I wanted to bring attention to that, highlighting the work of artists such as Dillinger and Little John who had sung about Clarks many years before.” In the words of Jamaican producer Bunny ‘Striker’ Lee: “From ever since, Clarks is a number one shoe inna Jamaica. Not just now, I’m talking from the Fifties come right up… Clarks stand the test of time inna Jamaica. All the other shoes come and bow right down at Clarks’ Foot.”

Written and compiled by Al Fingers and featuring new photographs by Mark Read, Clarks in Jamaica is available from all good bookshops, published by One Love Books. Price: £30.