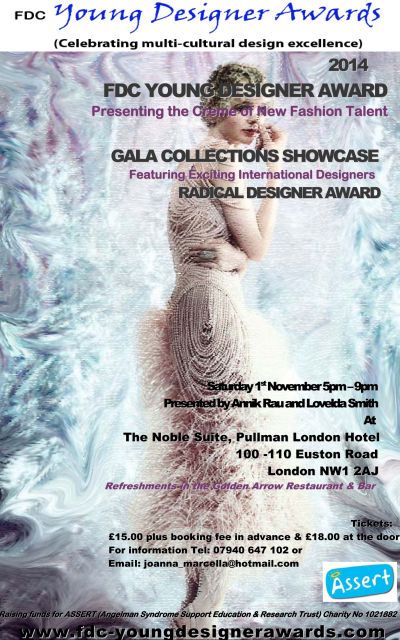 The gala evening will be hosted by Annik Rau and Lovelda Smith. Selected young designers from all over the UK who have excelled creatively and have the potential to be the next big stars of the international fashion stage will be competing for the coveted Young Designer Award, ages 9-25 years and the Radical Designers Award, ages 21-29 years. A very special showcase at Vancouver Fashion Week Canada is being offered to one of our winners.

This year the young designer awards participants have also been offered the fantastic opportunity to debut a collection in New York City at our Angelman Syndrome Charity Gala Showcase.

Joanna Marcella the founder of the awards says “Our unique selling point is: our events recognises young multicultural design talent and catapults young fashion designers right on to the international fashion stage.”

The Young Designer Awards team seek to work with talented and gifted young designers who have the potential to follow in the footsteps of fashion icons such as, Vivienne Westwood and Alexander McQueen.

Joanna continues “The FDC Young Designer Awards has been growing from strength to strength and its reputation has reached all corners of the globe.”

This year sees the inclusion of the Collections Showcase with designers showcasing from India, Russia, Spain, France, the USA and of course the UK. Fashionista’s, media and industry professionals are invited to come and see innovative creations and the stunning models strutting their stuff on the catwalk.

The Collections showcase is not only a platform for emerging international designers it is an event that raises awareness about the neuro-genetic disorder called Angelman Syndrome.

The Pullman London Hotel St Pancras is a vibrant hotel, recently transformed into one of the city’s premiere upscale hotels. With fine dining at the Golden Arrow Restaurant & Bar; and is in the heart of London and only a few minutes from Bloomsbury.