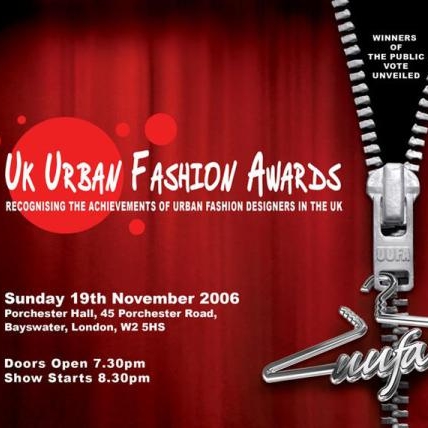 The first ever UK URBAN FASHION AWARDS (UUFA) is set to take place on Sunday 19th November 2006 at Porchester Hall, Bayswater. The ceremony, created to recognise the achievement of urban fashion designers in the UK, is being hosted by the UUFA Organisation, a collective that aims to increase public recognition of the achievements of urban fashion designers within the UK.

Reuben Christian, UUFA Creative Director said: “We recognise that the UK urban fashion industry is in desperate need of a platform to showcase itself to the world. The urban music industry already benefits from numerous award ceremonies, something the fashion industry needs. Therefore UUFA presents this unique opportunity.”

On the night, winning designers will receive awards and will showcase their collections to fashion buyers, press, celebrities and the general public. Tim Campbell (The Apprentice), Jasmine Dotiwala (MTV Producer), Paul McKenzie (Editor, Touch Magazine), Kojo (BBC 1) and Terri Walker, amongst others, will be presenting awards on the night. Touch Magazine, as well as other fashion/ lifestyle magazines and websites, will be covering the event.

There will be a champagne reception prior to the show with press, celebrities, fashion buyers and winning designers all invited. The show will follow and will comprise of a small exhibition and seven catwalk shows, each introduced by a brief piece of choreography.