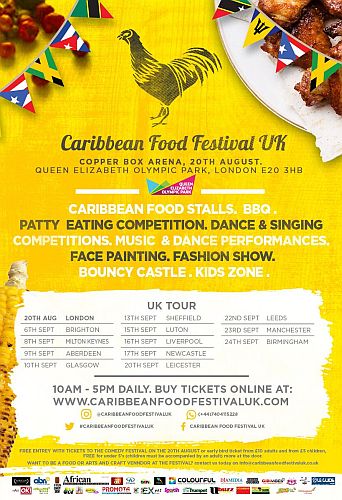 The Caribbean Food festival is the largest family-friendly festival in the UK held over 4 weeks (20th August – 24th September 2016) throughout the UK, starting with a grand event at the Queen Elizabeth park copper box arena on the 20th of August 2016, featuring various Caribbean restaurants throughout the UK, independent vendors selling food, merchandise, art and featuring Large-scale cultural performances, kids zone, entertainment and African music, all celebrating the rich cultural diversity and heritage of Caribbean Food.

The event is organised by E&C Global entertainment LTD, they are also the organisers of the Caribbean Comedy meets African comedy UK, E&C has being promoting the richness and beauty of the Caribbean and Africa to the UK public for the past 11 years, by holding monthly and annual events in London and throughout the UK.