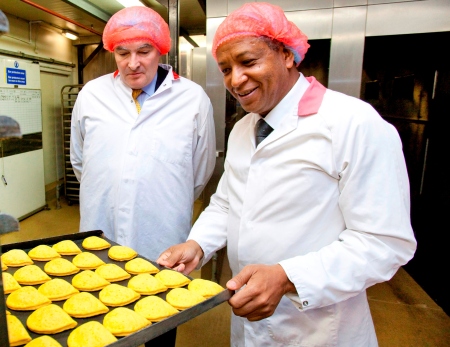 Lord ‘Oliver’ Henley, a parliamentary under secretary at the Department for the Environment Farming and Rural affairs could not have been further from the countryside when he toured Cleone Foods based in Birmingham’s Jewellery Quarter.

FOOD minister Lord Henley has been in Birmingham to learn about how the UK’s largest manufacturer of Caribbean style patties is also looking after the environment.

Lord ‘Oliver’ Henley, a parliamentary under secretary at the Department for the Environment Farming and Rural affairs could not have been further from the countryside when he toured Cleone Foods based in Birmingham’s Jewellery Quarter.

He was shown around the factory that employs more than 50 people and manufactures over 100,000 patties a week by the company founder and Managing Director, Wade Lyn, who has recently been appointed as the Midlands Business Ambassador for Business in the Community by the Prince of Wales.

The Minister was shown how Cleone Foods, makers of the Island Delight range of patties and slices disposes of its waste and uses minimum packaging which is both convenient for the retailer, shopper and at the same time environmentally friendly.

“All the waste from the factory is segregated and as much of it as possible is taken to be recycled rather than disposed to landfill,” said Wade Lyn.

“But I believe that more could be done across the country to ensure that food waste is sent for anaerobic digestion at biomass plants where it can be used to produce energy and fertilisers.”

Cleone Foods provides employment for people in one of the most deprived parts of the country and gives workers access to apprenticeships and other training opportunities.

The company works closely with’ Business in the Community’ and also hosts to the12/8 group that provides mentoring for small and medium sized businesses.

“Cleone Foods are an excellent example of how a small company can take collaborative action to build a sustainable future for people and planet, which is why they won our Small Company of the Year Award last year,” said David Darlaston, Regional Director of Business in the Community in the West Midlands.

“Through Wade’s leadership, Cleone Foods clearly demonstrate that ‘doing the right thing’ makes good business sense, as well as being better for the environment.”