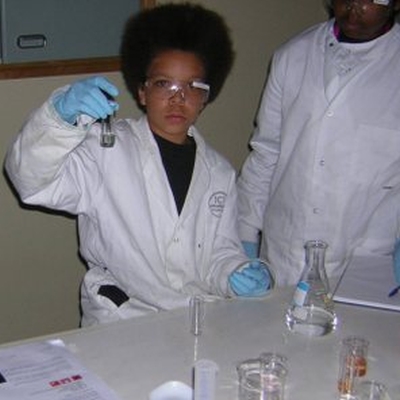 An exciting new project aimed at raising aspiration and achievement among Afro-Caribbean teenage boys was launched at Imperial College adding to its summer school programme.

The scheme aims to provide incentives to boys, often from failing schools, to pursue their passion for science and to nurture talent in the community.

A group of 25 boys, aged 12 and 13, from London and the South East spent three action packed, intensive weeks at the College under the Generating Genius scheme, gaining hands-on experience of science, engineering and medicine. This innovative scheme is supported by Imperial College, the charity, Generating Genius and Exscitec.

Over the next five years the group will return to Imperial and other institutions each summer to build on their skills and, as they get older, receive help with preparing for university. Every year there will be a new intake and it is hoped the project will expand to become a nationwide initiative.

The boys are mentored by Imperial students and academics, including medicine undergraduate, Collins Ekere, who says: “The scheme is aimed at bright young boys who are ready to achieve. The programme exposes them to a variety of things that are maybe more advanced than they cover at school and they are already responding really well. It will be great to see how they grow over the next five years.”

The summer school was divided up into three strands, Chemistry, Robotics and Engineering and Life Sciences. Activities included lectures and experiments. Each group of boys at the end of each week had to present their work to a panel made up of Imperial academics and high profile people from the funding bodies, the Learning Trust and the Sutton Trust. The panel decided on a winner for the best presentation at the end of each week.

Generating Genius is a registered charity that aims to promote the advancement of education in medicine and research science amongst children and young people from underrepresented backgrounds.

The project was launched at the Holiday Inn Kensington Forum Hotel, on 12th May 2005, and has successfully created a platform to create the next generation of research scientists and doctors.
Click on the weblink below for updated information.