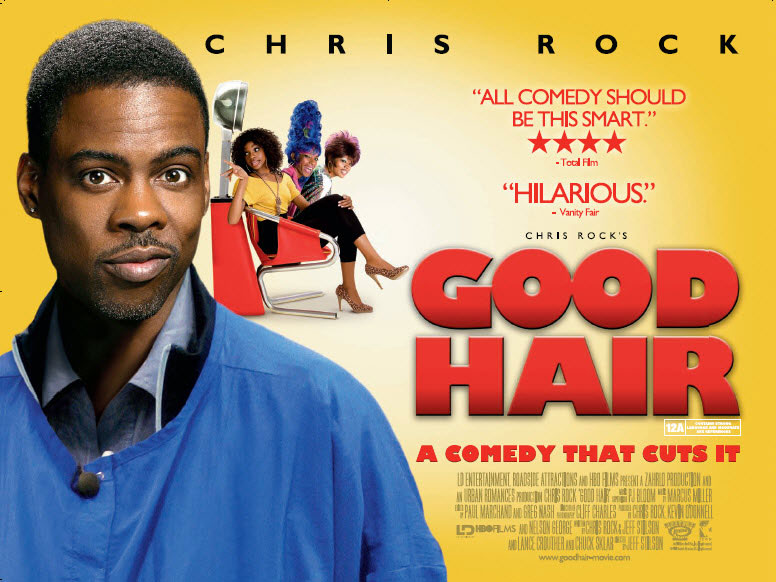 Written, produced and narrated by the world’s biggest comedian Chris Rock (Madagascar, The Longest Yard) and winner of the Special Jury Prize at the Sundance Film Festival 2009, GOOD HAIR is released on DVD by Icon Home Entertainment on 27 September 2010.

South Carolina-born African American comedian Chris Rock grew up in Brooklyn, his first break arriving after Eddie Murphy cast him in his Beverly Hills Cop II (1987). He went on to work on Saturday Night Live, from 1990-93, and summoned a fine turn as a crack addict in New Jack City (1991). It was his scathing HBO comedy special Bring the Pain (1996), which made him a household name in the US, earning him two Emmy awards on the way. TV series The Chris Rock Show followed, which ran from 1997-2000, as did roles in films as diverse as Dogma, Beverly Hills Ninja, Lethal Weapon 4, Nurse Betty, The Longest Yard, Bad Company, Bee Movie and Madagascar, along with a starring role in Down to Earth. Rock has also worked behind the camera, both as a writer and director of Head of State (2003) and I Think I Love My Wife (2007). In 2005, he launched TV series Everybody Hates Chris, which fan for four seasons, scooping several Emmys. He recently produced and starred in Death at a Funeral. Following the release of his first documentary, Good Hair, Rock is working on a documentary about debt called Credit is the Devil…

How was your presentation of Good Hair in Brixton last night?

Do you think people are surprised that the film isn’t stuffed with comedy?

Hey, it’s funny. People who hear that I am doing a documentary A) they don’t believe me or think B) has he gone serious? Comedians go serious? Hell, no. And C) then there are some people who think I am just making fun of black women and their hair styles. No. It is a serious doc and is actually pretty funny in the way that a Michael Moore documentary is. It is quite informative. Black or white, you could enjoy it. You are going to learn a lot and see a lot. It is a large-scope documentary. It is travelling all over the United States and all over the world, to places like India.

Where did the seed idea come from, the Hair Show?
That’s right, the seed idea was actually The Hair Show. I had stumbled on to The Hair Show twenty years ago and I thought, ‘The Hair Show should have been a movie twenty years ago’. But twenty years ago they were not making these kinds of documentaries. I had this weird idea and I didn’t have a world in which to make it. Like the guy who wanted to go to the moon. Loopy. ‘What is he talking about, the moon?’ Cut to two years later. My daughters have a little hair issue and it kind of sparked this kernel of an idea up. Like ‘Oh, Man, I forgot all about that’ and so it made me go, ‘Okay, I think I am going to do that.’ The Hair Show is twice a year too so I knew I had to do it.

You could have done a good fictional movie on that hair show…
Actually, I never thought of making it fictional. I always thought what you see right here on the screen is what I always thought. I knew there was going to be funny documentaries before there were any. It is weird. I have actually got offers to make these kinds of films now. As far as fiction goes you could easily do the Jason Gregory story. You could do the white guy that comes from a small town and dreams of cutting black hair! That might be kind of funny. Owen Wilson could also do that. He could actually play Jason; he’s got the hair!

You mentioned your daughters having hair issues as a catalyst for the movie…
Yeah. She was just really enjoying her girlfriend’s hair. She was like, ‘But this is such good hair’.

She used those words?
Yes. And I was like, ‘Baby your hair is beautiful. I like your hair much better than hers.’ Positive reinforcement. So that was what got me thinking about it. More so than anything it was my daughters. Otherwise I would have taken it for granted like everybody else.

You were quite careful to be objective in the film, and not to criticise people openly, like the woman who gives her three-year-old a perm…
The woman is wrong for putting the thing on the girl’s hair but does she think she is wrong? That is the thing. You can’t arrest somebody for speeding if there are no signs up, you know what I mean? She doesn’t know what’s wrong. She has probably got her own hair permed at a young age. I don’t want to make people feel bad and judgemental. I played it down the middle and I am really interested. It feels as though people want me to be mad at certain people in the movie. But has journalism and everything become so judgemental that we are not even used to seeing anything down the middle any more? We are coming up in an era where people don’t even know what objectivity is. You don’t really get in news any more. You get what is the right wing news or what is the left wing news. It’s weird. The news in the middle nobody watches. There are parts of the news are very objective but that bores the hell out of people.

Does the fact that so many black women want hair that belongs to non-black women upset you at all?
It makes you sad at the end of the film when these people live in such poverty, and make no money on selling their hair. Black women and their hair, it doesn’t make you sad. Kids, that makes me sad. Kids getting perms and kids learning these habits at a young age… I have daughters six and eight, and there’s no flaw on my daughters. That freaks me out, if someone would think that there is anything wrong with their kids. That stuff freaks me out. But otherwise it is, ‘Just let people do what they want to do.’

Whatever race or creed people are, they just want to look different…
Women get bored very easily. Do you know why some white women dye their hair blonde? Yet what’s the point? You are beautiful. It’s your own hair. But they go blonde. Millions and millions of them. Of all the white men I have met I would say ten per cent are blond at the very most. But most white women are blonde, so like eighty per cent of white women dye their hair blonde? It is crazy. I am going to assume that the same percentage of white men are blonde as women. There are not a lot of blonde guys. There are just not. It is rare. It actually sticks out, a blond guy. Unless you go to Norway or something, you don’t see it.

The TV series you produced, Everybody Hates Chris, what aspects were drawn from your own life, the hard working, strict father?
That was real. The mother was real and I am the oldest of seven, while we only had three of us on the show. But my brothers were always cooler than me, more athletic than me and I was the oldest so it was kind of weird. The younger ones are definitely cut a lot more slack. As the older one, you are an explorer. You are knocking down walls and they walk through them.

Did the comedy come from the fact that you were picked on at school for being a minority or did come from being at home with the family and being happy?
I don’t know. Maybe both. I was small too. Half of whatever happened to me happened because I was just a skinny kid. A skinny kid is going to get their ass beat anyway so I if I was a skinny white kid I probably would have the shit kicked out of me too.

When you were at school, apart from wanting to leave, what did you want to do?
I wanted to be a comedy writer even back then. There were black comedy writers but the only black people I ever saw in comedy were comedians. Writer? That seemed so foreign. Writer? I don’t know any writers. I had never seen a black writer; it was like being an Eskimo or something.

And now, you still consider yourself a comedian first and foremost?
Yes. I am a comedian. Forever. No matter what.