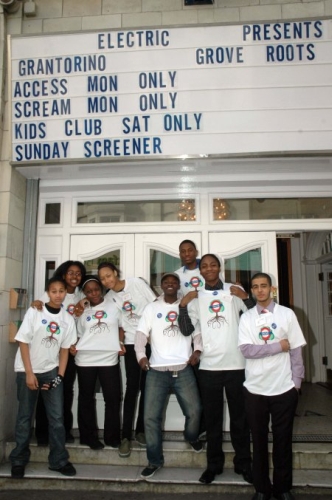 The Octavia Foundation gives young people a platform in film

Grove Roots was funded through HLF’s Young Roots programme which supports projects that involve 13-25 year-olds in finding out about their heritage, developing skills, building confidence and promoting community involvement. Since 2002 the programme has awarded £18.2 million to over 840 projects and more than 30,000 young people have learned about their heritage through taking part in Young Roots projects.

Thanks to a grant from the Heritage Lottery Fund (HLF), the Octavia Foundation has given eight young West Londoners the opportunity to document the history of their local area in a film that traces the evolution of Ladbroke Grove from the 1958 race riots to the present day.

Featuring the voices of renowned screenwriter Richard Curtis as well as other local musicians, artists, community workers and residents, the film tells the story of the Ladbroke Grove area from the 1958 race riots to the ethnically rich place it is today.

‘Grove Roots’ was given a standing ovation from the community during its first exclusive premiere last Friday [27 February] at the Electric Cinema in Notting Hill, and is now set to embark on a screening tour across the Capital.

The eight young film-makers, all from culturally diverse backgrounds researched, directed and produced the film themselves as part of an innovative community project run by the Octavia Foundation, which received funding from the Heritage Lottery Fund. The young people consulted all generations of residents and creative talents in the area and were guided from experts at HistoryTalk.

The film unearths the pivotal history of the area, including the rise of the Notting Hill Carnival, the fruition of ‘Frestonia’ and the lives of unique local figures such as Claudia Jones who is remembered in the UK as the ‘mother of Notting Hill Carnival’and Peter Rachmann, a notorious landlord.

Speaking on London Tonight, Rae Evelyn, one of the young people involved in the film said:

“The overall experience has affected my life in a positive way because it has given me an insight into the film-making world, given me experience and that is the direction I want to take my career in”

“The Octavia Foundation aims to encourage community involvement and deliver opportunity. Grove Roots is a fantastic example of this – the young people involved have thrived by learning new skills and working with the whole community.”

Jo Reilly, Head of Participation and Learning at the Heritage Lottery Fund, said:

“It’s great to see a group of young people exploring the rich heritage of their local area and making decisions about what is important to pass on to others. The public screening of the Grove Roots film will be a fitting celebration of their hard work and new found skills.”