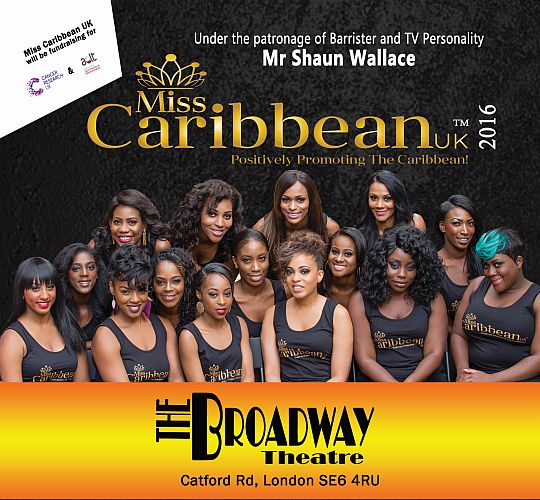 2016 will see the crowning of a new host of contestants competing for the title of the UK’s Queen of the Caribbean.

Sitting within the diversity that the UK offers, Miss Caribbean UK (MCUK) attracts not only those from or connected with the Caribbean but others from African, American, Asian and European heritages, keen to enjoy the positive promotion of unity, colour, fashion, dance, gastronomy, music, culture and edutainment.

The pageant was created to inspire by example; those who feel disadvantaged and to empower them by showing them that, beauty is more than skin deep.

The MCUK organisers, Clayton and Jacqui Brown, have expressed that this is set to be The Ultimate Crown for Caribbean Pageants in the UK.

“We want to ensure that this event continues to grow and includes the whole Caribbean community, both here in the UK and Internationally. This is more than just a pageant to us; it is a means to unite around a common cause.

We want MCUK to be a vehicle which will assist in bringing the Caribbean and its diaspora within the UK, closer. We want the old and younger generation Caribbean descendants to recognise the influence and impact that the Caribbean Diaspora has had on UK culture and thus, appreciate the importance of retaining the link with their Caribbean heritage.”

We are delighted to announce that the Barrister and TV Personality Mr Shaun Wallace has agreed to become our first official Patron. Known for being one of the Chasers on ITV’s quiz show THE CHASE where he has the nickname: The Dark Destroyer, Mr Wallace has made the following statement: “I’m delighted to announce that I’ve become a Miss Caribbean UK Patron. I attended the Miss Caribbean UK pageant last year and had a wonderful time and I think that Miss Caribbean UK is a really positive way to promote the Caribbean in the UK. It is tremendous to see such a wonderful cause grow organically and I look forward to seeing British women of Caribbean descent continue to being promoted in such a positive light.”

We are also very proud to announce that the production: “The Miss Caribbean UK Grand Final” will be filmed on Saturday 3rd December 2016 at the Broadway Theatre, Catford and is scheduled to be aired on the London Live TV Channel late December / Early January.

Miss Caribbean UK 2016 (MCUK) will be fundraising for the ACLT (African Caribbean Leukaemia Trust) and Cancer Research UK because we want to help fund cutting-edge research to find cures, save lives, and support cancer patients move their lives forward. Please help us raise money for a good cause!