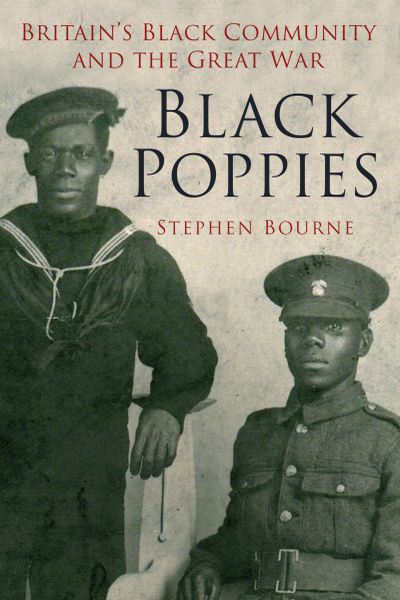 Black Poppies an in-depth look at the very neglected subject of the Black British experience in the First World War. Published 4th August 2014, this £12.99 paperback original is lest we forget the ‘quiet storm’ of the forgotten black British voices of history.

In 1914 there were at least 10,000 black Britons, many of African and West Indian heritage, fiercely loyal to their Mother Country. Despite being discouraged from serving in the British Army during the First World War, men managed to join all branches of the armed forces, and black communities made a vital contribution, both on the front and at home.

By 1918 it is estimated that the black population had trebled to 30,000, and after the war many black soldiers who had fought for Britain decided to make it their home.

Black Poppies explores the military and civilian wartime experiences of these men and of women, from the trenches to the music hall. Poignantly, it concludes by examining the anti-black race riots of 1919 in cities like Cardiff and Liverpool, where black citizens came under attack from returning white soldiers who resented their presence, in spite of what they and their families had done for Britain during the war.

• An in-depth look at the very neglected subject of the Black British experience in the First World War.
• With the exception of Walter Tull, stories of black servicemen in the First World War have been all but excluded from our history books.
• Illustrating how the cumulative effect of their lives and deeds has been manifested in our desire for equality, integration and tolerance today.
• Looks at both military and civilian experiences across Britain.
• Snapshots of the lives of Britain’s diverse black community from 1914 to 1919.
• Covers the story of the 1919 race riots and attitudes towards black families, despite their wartime activities
• Illustrated with previously unpublished archive photographs.

Stephen Bourne is as one of Britain’s leading experts on Black British history. The author of fourteen books on the subject, Stephen has written for BBC History Magazine and is a regular contributor to the Oxford Dictionary of National Biography. The author of Mother Country – Britain’s Black Community on the Home Front 1939-45 (THP, 2010) and The Motherland Calls – Britain’s Black Servicemen & Women 1939¬-45 (THP, 2012), he has been shortlisted for awards such as The Voice Community Award for Literature and came runner up for The Raymond Williams Prize for Community Publishing, and in 2012 was awarded a Wingate Scholarship to undertake research into Black theatre in Britain.

Buy A copy of Black Poppies
Available from all bookshops and Amazon.co.uk or from direct from The History Press (telephone: Marston Books on 01235 465500)