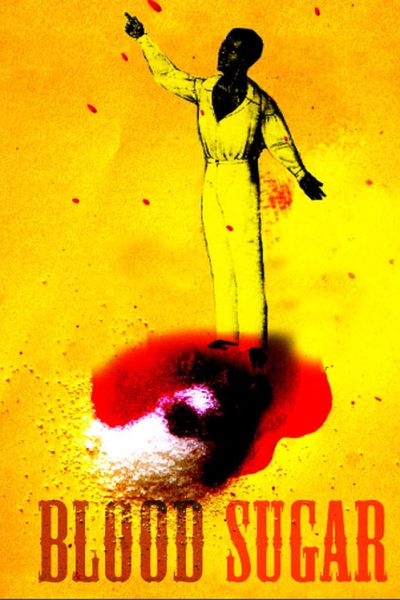 Blood Sugar tells the story of Slavery and the Abolition of the Slave Trade, from a local angle.

Blood Sugar creates a promenade through the Queen’s House, Greenwich, the first classical building in Britain. The impact of the profits from slavery was felt throughout society. The benefits to the economy during Britain’s transformation from an agricultural to a commercial and then to an industrial society were enormous.

Blood Sugar as a title came from a member of the company who discovered he would not be able to participate – he volunteered to help in any other way. The promenade performance was, at that time, labouring under the cumbersome title of Emancipation of the Dispossessed. Next morning he came up with a new title – Blood Sugar. Paul Stephens went on to become community outreach worker for the project working alongside Tony O’Leary.

The script changed weekly. Each week new research was added. The company seemed to change on a weekly basis too, so Kim agreed to move from Assistant Director role to play the role of Sancho, one of the narrators. Pat got a Panto job in Bromley – replacing Pat is like putting mercury back in a thermometer. Then Oliver joins the company – now we have the perfect Sailor. Then Desron joins. The company expands to become a talented collective bringing their own life experience to bear on their parts. Ben has been researching his character Reverend Ramsay and wants to discover if Ramsay brought his black wife back with him from the West Indies. Iris, a local historian, playing a Quaker historian, does her own research. The script had Quakers addressing each other as brother and sister. Iris phones the Society of Friends and discovers the Quakers address each other as friend. The company creates different ways of staging the research, some of which is lifted straight from pamphlets and reports to Parliament.

Script discussions continue long after rehearsals end. Arab slave trading is compared to European.’What about when Cornish women were kidnapped and enslaved by Corsairs?’

‘The Irish and the Scots were slave traded as well’. Bola says that all he was taught at school
in Nigeria was ‘William Wilberforce freed the slaves’. Rachel, who works as a tour guide, tells
us that the Queen’s House Colonnade was originally built as a bridge for the aristocracy over
the dirty Dover Road. Discussions leading to permission to stage the show in Queen’s House
have everyone on tenterhooks. All are convinced it’s the perfect site.

The Lewisham College students have been working on their scene the longest. In workshops
they evolved the entire narrative shape of their piece. Research material was then worked into
the script. Lisa Stubbs, Lewisham College Course Tutor, is Associate Director – she develops a
sharper and more dramatic structure. The project becomes a process rather than a product.Later I suggest to the Media Technology class that this may well be one of the most important subjects they will ever work on – this is where our multi racial society comes from and always, as a historian, I attempt to understand the present by comprehending the past. Bola explains ‘we are doing this for humanity really’. Someone else says that ‘for me it’s the whole process that’s important – the personal research I do outside is as important as the work in rehearsal’. The voyage is as important as the destination. Someone else comes up with the observation that ‘it’s still going on today!’ As a company we agreed to end the presentation with real cases from campaigns in 2007 by Slavery International.

BLOOD SUGAR is one part of Emancipation of the Dispossessed – a larger project which also includes a guided walk to sites of special interest in Lewisham, Greenwich and Kent; resources for primary and secondary teachers, workshops in schools and a web site.