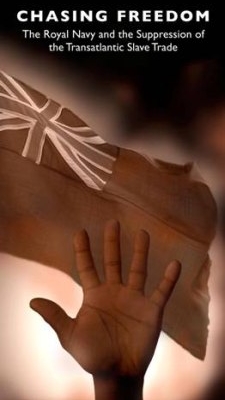 Chasing Freedom is part of the major programme of events being held nationwide.

Chasing Freedom is a special exhibition and accompanying programme of learning and community events to commemorate the Bicentenary of the Parliamentary Abolition of the Slave Trade at the Royal Naval Museum, Portsmouth Historic Dockyard. The exhibition tells the unique story of the Royal Navy’s role in fighting the slave trade.

2007: The Bicentenary of the Abolition of the Slave Trade 25th March 2007 marks the 200th anniversary of the 1807 Abolition of the Slave Trade Act. This Act outlawed the slave trade throughout the British Empire and made it illegal for British ships to be involved in the trade, marking the beginning of the end for the Transatlantic traffic in human beings. In 2006, the government launched a special Advisory Group, chaired by the Deputy Prime Minister, to maximise contributions to the Bicentenary programme. The Heritage Lottery Fund is supporting the Bicentenary with a national programme of funding to support organisations and groups wishing to mark the Bicentenary.

Royal Naval Museum, Portsmouth Historic Dockyard.
The Bicentenary also provides an opportunity to acknowledge and raise awareness of the horrific traffic in people that continues to take place today, for example, in the form of bonded labour or the forced recruitment of child soldiers.

Chasing Freedom: the exhibition
Other museums across the UK are covering various aspects of the story of the slave trade and the campaign for its abolition. One part of the story that is often overlooked is the role of the Royal Navy. Uniquely, the Portsmouth displays, and the comprehensive associated programme of events and learning activities, focuses attention on the pivotal role played by the Royal Navy in combating the trade in the Atlantic Ocean. The Navy was at the forefront of the suppression of the trade following its abolition in 1807. In 1808 the Admiralty established the West Africa Squadron and by 1865 nearly 150,000 people had been freed as a result of its anti-slavery operations. The exhibition aims to:

– raise the question of why, 200 years after its abolition, modern forms of slavery still persist

– highlight the continuing role of the Navy today in its worldwide humanitarian operations, including the prevention of people trafficking

For the first time, Chasing Freedom tells the human story behind the slave trade, and the Naval campaign for its suppression, including the accounts of enslaved Africans, and naval personnel serving in the West Africa Squadron. Visitors can listen to firsthand accounts of life on the Squadron through audio extracts from the original diaries of Cheesman Henry Binstead, an officer on the Squadron’s ship HMS Owen Glendower. Binstead vividly describes daily life on the Squadron: patrolling the vast West African coast, boarding overcrowded slave ships and living as part of a crew who are suffering – and in no small numbers, dying – from tropical diseases, such as yellow fever and malaria.

Visitors can experience the traumatic crossing of the Middle Passage – endured by millions of enslaved Africans – in a reconstructed slave deck, and can handle reproductions of the artefacts used to restrain the Africans during their capture and subsequent journey, including leg irons, handcuffs and a neck collar. The exhibition also features two exclusive films, produced especially for Chasing Freedom, which recreate the abolition debate with key figures from the time – including Vice-Admiral Lord Nelson – and discuss the legacy of the Squadron’s work.

Key exhibits on display include:

-Figureheads of ships that served in the Squadron, patrolling the coasts of West Africa to intercept slave ships and liberate the enslaved Africans on board, including the figureheads of the West Africa Squadron ships, HMS Blazer and HMS Madagascar

– The diary of Cheesman Henry Binstead, a Midshipman who served on the West Africa Squadron’s ship HMS Owen Glendower, between 1823-4 (see Key Facts section for more information on Binstead and an extract from his diary, pages 12-13)

– A range of artefacts linked to the slave trade and its abolition, including a Wedgwood medallion

Chasing Freedom Educational Activities
Workshops for Schools The Royal Naval Museum builds on its already successful and highly popular schools’ programme with the introduction of two new workshops: Slavery through Objects The Transatlantic Slave Trade Both workshops are aimed at Key Stage 2 and Key Stage 3 pupils, and are available throughout 2007.

Teacher Training
In 2007, to increase participation in the Bicentenary commemoration, training sessions will be run for teachers wishing to extend their subject knowledge and learn more about the different approaches which can be taken in teaching slavery through history, citizenship, art and design.

Schools are also invited to participate in the Chasing Freedom Conference, and African Legacy Week, which is suitable for Able Key Stage 1, Key Stage 2 and Key Stage 3 pupils and has curriculum links to History, Geography, Citizenship, Art and Design.