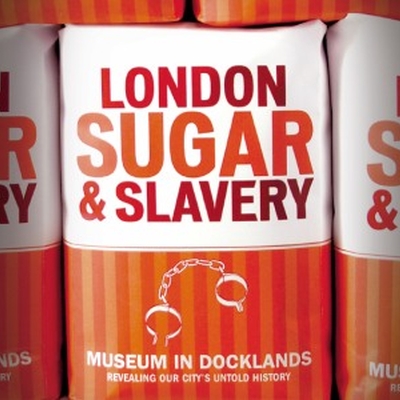 What is London’s dirty big secret? What does a sweet cuppa have to do with a terrible crime against humanity? Visit the only permanent exhibition to examine London’s involvement in transatlantic slavery.

What is London’s dirty big secret? What does a sweet cuppa have to do with a terrible crime against humanity? What product links 10 million enslaved Africans and London’s Dockers? How did English ladies and freedom fighters in the Caribbean find themselves united in struggle? Who really led the abolition campaign for the transatlantic slave trade? And what price freedom?

Once the fourth largest slaving port in the world, London’s involvement in the transatlantic slave trade is revealed in the Museum in Docklands permanent gallery, London, Sugar & Slavery. Set in a former sugar warehouse built to store produce from the Caribbean plantations, the Museum is tangible evidence of London’s connections with slavery.

The gallery reveals an untold history, which joins the dots between ordinary Londoners with a taste for the sweeter things in life, arch-capitalism, despoiled West African civilizations and the thriving multicultural city we enjoy today.

Personal accounts, film, music, interactives and over 140 objects bring home the complexities and humanity of the issues around the roaring trade in sugar and humans, slave resistance and the abolition campaign, and the legacies of the enduring relationship between London and the Caribbean.

Exquisite African artefacts pre-dating Europeans’ arrival in the continent, including a bronze leopard from Benin, and the beautiful bust of a Yoruba King, attest to the rich cultural history of West African art. The gallery explores how a sophisticated society was debased in European minds to justify the inhumane mechanics of an industry that gave rise to obscene profits, horrific brutality and sowed the seeds for racism today.

The harsh reality of life on the ships and the plantations is brought home by the grim apparatus of discipline and restraint. Punishment collars and manacles, whips and chains, give unsettling reminders of the true nature of enforced labour. Key artefacts in the new gallery, recently acquired by the Museum, are the surviving papers of Thomas and John Mills, who owned plantations in St Kitts and Nevis, providing us with glimpses into the lives of both the enslaved and the slaver.

The Buxton table, at which the terms of the Abolition Act were hammered out, will be on display. But the gallery will debunk the myth that abolition was achieved by a few evangelical parliamentarians. Olaudah Equiano, Ottobah Cugoano, Ignatius Sancho, Phillis Wheatley and Mary Prince, are amongst those African voices whose eloquent testimony were crucial to forcing change.

London, Sugar & Slavery acknowledges enslaved Africans as the prime agents of resistance. With as many as one in four slave ships experiencing a revolt, and armed uprisings including those on St Kitts (1639) and Haiti (1791), heroic and constant African defiance and disruption of enslavement is too often overlooked.

The pioneering modern-day pressure-group tactics deployed by the Abolition movement to engage ordinary citizens is seen through the artefacts of their campaigns: specially designed and branded campaign material, printed propaganda, mass petitions, consumer boycotts and speaking tours. The gallery follows those women, who, with no voice at the ballot box, voted with their purses and radicalised the movement. But it also navigates the complex visual grammar of the campaign materials, including the passive presentation of the enslaved African person, begging for freedom in Josiah Wedgwood’s famous design that became ubiquitous on sugar bowls and tokens.

An immersive sound and light experience, encourages visitors to consider the meaning of enslavement and freedom both in terms of the transatlantic slave trade and for us all today, whilst spaces in the gallery are given over to community projects especially designed to involve Londoners of all ages and backgrounds in a story that binds us all.

The gallery will challenge what people think they know about the transatlantic slave trade and show how this terrible traffic made the London we know today.

David Spence, Director of the Museum in Docklands said:
“We hope that the gallery will help Londoners from all backgrounds understand their own heritage and identity better. People may find it uncomfortable, but to grasp this is to begin to understand many facets of society today, including attitudes towards race and the melding of British, African and Caribbean cultures.”

Colin Prescod, Chair of the Institute of Race Relations and advisor on the gallery said:
“Over some three centuries, transatlantic slavery and the associated ‘triangle trade’ generated extraordinary profit, amassed unimaginable wealth, and spawned obscenely inhumane brutalities on a massive scale. Museum in Docklands’ bold new gallery demonstrates that these events were pivotal in the history of London’s and Britain’s rise to world dominance, and that they bequeathed a discomfiting legacy in a complex heritage.”

Catherine Hall, Professor of History, University College London and advisor on the gallery said:
“‘London, Sugar & Slavery’ has helped me to think about my city – how the fruits of slavery are built into the environment in which we live â€“ and how relationships between people, right into the present, have been shaped by that history. The gallery is a must for all Londoners.”