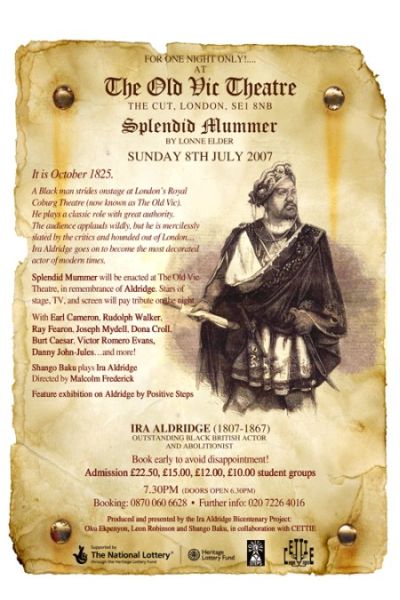 A resurrection drama. A definitive exhibition installed in a historic venue. Major actors of stage, screen, and TV pay tribute to a legend. A feast of entertainment on a night to remember. It all comes together in SPLENDID MUMMER, celebrating the life of Ira Aldridge – born two centuries ago in 1807 – the year of the Abolition of the Slave Trade.

Aldridge came to Britain from America in his teens, determined to make it as an actor. Soon he was performing at recognised venues – such as the Royal Coburg (now The Old Vic). He chose dignified roles such as Oroonoko and Othello – roles that exposed the lie of Black inferiority. But by daring to play Shakespeare he was treading on hallowed ground. He broke into the heartland of the British ‘classics’ , which had previously been the exclusive domain of white actors. He was a thorn in the side of the pro-slavery lobby. The London press singled him out for vindictive attacks – even though he continued to enthral audiences with his magnificent performances.

Undeterred, Aldridge toured successfully throughout Britain and Europe, attracting awards and plaudits everywhere he went. His triumphs in Russia gave him iconic status during his lifetime. One Russian critic said that the evenings on which he saw Aldridge’s Othello, Lear, Shylock and Macbeth “were undoubtedly the best I have ever spent in the theatre”. It is rumoured that Stanislavsky, the author of method-acting, witnessed Aldridge’s ‘naturalistic’ performances as a young boy in Russia.

Aldridge’s bicentenary casts a long shadow over issues of human rights and social equity. How is it possible that we know so little about this outstanding actor who single-handedly transformed modern theatre practice? Until Aldridge, Black performers were seen as lowly entertainers, buffoons or freaks, using exaggerated language and self-caricature to earn a living. After Aldridge came Paul Robeson, a century later, picking up where the old master had left off in the role of Othello. By then Aldridge had been consigned to oblivion, and his kudos usurped by others.

Today, the involvement of leading Black actors in Aldridge’s commemoration is significant. It is an acknowledgement of legacy and accreditation. The importance of the arts in shaping social consciousness is as relevant now as it was in Aldridge’s day. The need to empower a new generation with stirring role models is even more critical. Aldridge remains an outstanding example of victory over adversity, prejudice, and institutionalised racism.

The Ira Aldridge Bicentenary Project is the brainchild of three cultural activists: Oku Ekpenyon (Historian), Leon Robinson (Archivist), and Shango Baku (Actor/Writer). The Project brings together research, exhibition, and performance in a unique synthesis. The aim is to raise public awareness of Aldridge, and by implication, to throw light on the hidden contributions Black people have made to British arts and culture – in defiance of glass-ceilings, labels or barriers imposed on them.

Produced and presented by The Ira Aldridge Bicentenary Project in collaboration with CETTIE (Cultural Exchange Through Theatre In Education).