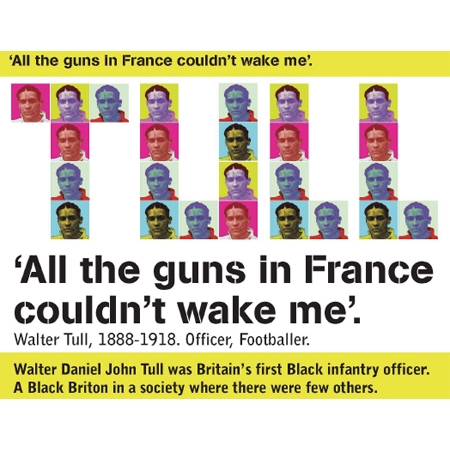 All the guns in France couldn’t wake me’ by Phil Vasili is the new biography of Walter Tull, professional football player and first British Army Officer, who died in the last Battle of the Somme a hero.

Walter Tull, the grandson of slaves, started life in a Methodist orphanage but went on to enjoy a highly successful football career playing for Northampton Town and Tottenham Hotspur.

Walter is remembered on two memorials in Dover – the Town Memorial outside Maison Dieu House, and the Parish Memorial at River. He’s also named on a scroll in River church. Walter’s mother was born in Dover, and his sisters and step-parents lived in the town for many years after his death. Walter’s family requested his name should be on the Dover memorials, and they attended the unveiling ceremonies, laying wreaths to their lost loved stepson and brother.

From schoolchildren to pensioners, people across the country (including Dover) participated in art workshops, drama, and animation workshops and discussion groups.