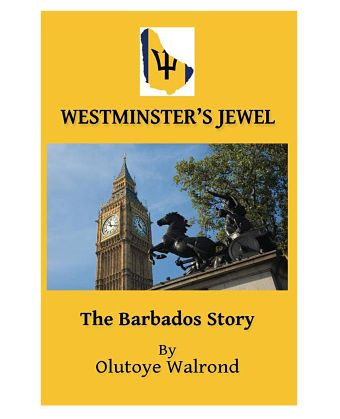 By Barbados native, Olutoye Walrond, ‘Westminster’s Jewel: The Barbados Story’ is a definitive and rare exposé on the history and evolution of Barbadian society. Walrond takes readers on a journey from the traumatic years of enslavement and British colonialism through the struggles of the post-independence period, the turbulent thirties and other major events leading to modern Barbados. In his characteristically elegant style, the author offers us an easy-reading insight into the fabric of Barbadian society. There’s nothing quite like this on the market, and there’s no other place out there quite like Barbados.

While many people these days just think of Barbados as a good holiday alternative to the Mediterranean, this small island nation was once so lucrative to the British that it was considered by many as “one of the jewels in the Crown of the Empire”.

It’s an island with a story, not yet fully understood even by Barbadians themselves.

But one Barbadian native, Olutoye Walrond, is now thrusting his homeland under the spotlight in one of the most fascinating and beautiful exposés of the country ever written. ‘Westminster’s Jewel: The Barbados Story’ uses historical narratives, personal commentary and stunning poetry to take readers on a journey from Barbados’ colonization in the early 17th century right up to the present.

WESTMINSTER’S JEWEL is a rare exposé on the history and evolution of Barbadian society that will captivate Barbadians (and other Caribbeans) as well as readers from the United Kingdom and the wider Commonwealth who may be unfamiliar with the history of British colonialism in the Caribbean. For instance, how many British citizens know that they may have distant relatives living in Barbados?

The book is a curious mix of narrative and poetry, done in the author’s own elegant – at times caustic style. It presents the Barbados story in an easy, non-academic fashion – from the settlement by the British in 1627 to the present; and offers critical – sometimes biting – commentary on current social norms.

The land of flying fish and cou-cou – the national dish – and birthplace of the Caribbean cricket icon, Sir Garfield Sobers, lies at 13 degrees north and 59 degrees west, making it the most easterly of the Caribbean islands. Unlike some of the other British-ruled islands, it wasn’t blessed with a large land mass – it’s merely 21 miles long and 14 miles wide.

But size apart, Barbados’ contribution to the economic power of the British Empire in the 17th. and 18th. centuries was so outstanding the island was regarded as one of the “jewels” of the imperial crown. The recently published book, “Ten Cities that Made an Empire” by the British M.P, Tristram Hunt, lists Bridgetown, Barbados among the ten. At the core of that reputation were thousands of African slaves whose unpaid labour on sugar plantations helped to fund the industrial revolution in Britain and enabled British sugar barons to live an opulent life.

The abolition of slavery in 1838 was a major blessing for the African population of the island. It liberated them from much of the brutality and grind of slavery, but did little to advance their welfare otherwise. They continued to be ruled by a clique of British-descended planters and merchants who had everything but the interests of their black compatriots at heart.

The period immediately following Emancipation in the mid 20th. Century was a period of struggle by radical, middle-class figures against the oppression this clique visited on the mass of the people. But real progress would only come after the advent of universal adult suffrage and the introduction of black rule.

From a “jewel” in the imperial crown, Barbados, today, is a struggling economy, dependent on tourism, off-shore business and an ever-declining sugar industry. The jewel has lost its sparkle, even as the sun has set on the Empire. The ravages of slavery and colonialism are never far from the eye.

But slavery and colonialism have not only left an economic legacy, they have also left a major psychological legacy as well: a people with a woeful lack of self-confidence – who live in the shadows of those who once dominated their lives.

“This book’s target market transcends the Barbados population, without a doubt,” explains the author. “The local history will of course be of great interest to those familiar with the island, but the book will also be a bold and rude awakening to many of the unspeakable horrors of British enslavement in the Caribbean. And Brits will find that beyond the lure of brilliant sunshine, tropical breezes and locally-made rum, the shared historical experience has left a legacy that binds our two countries with many different strands.”

Continuing, “The present day also gets plenty of attention, and I beg the questions – has Westminster’s jewel lost its glitter? What part does Britain have to play in all of this and what can be done to make Barbados the economic and social powerhouse it once was? I suppose there are no right or wrong answers and, by exploring everything from a multi-disciplinary approach that encompasses both narrative and poetry, I hope people around the world will pick up my book and give it some thought.”

With the volume’s demand expected to increase, interested readers are urged to secure their copies without delay.

Olutoye Walrond grew up in rural Barbados, one of a series of islands colonized by the British in the Caribbean, a region known for calypso, carnival and cricket. He shares the island with fellow Barbadian, the legendary former West Indies Cricketer, Sir Garfield Sobers. He was christened Glyne Walrond at St. John’s Parish (Anglican) Church back in the 1950’s. But some time in the 1980’s he adopted the Nigerian name Olutoye, in affirmation of his African ancestry. Olu – as he’s called – began his working life as a primary school teacher, but settled into broadcasting, first as a Reporter with the then Rediffusion wired service, and then as a Reporter and later Television Producer/Presenter with the state-owned Caribbean Broadcasting Corporation in Barbados. He retired from that position in 2013. While at CBC, he produced many educational programmes on history, social affairs and Pan Africanist themes. Some of them have won him awards, including the Caribbean Broadcasting Union award for best radio programme, the CBC award for best local television programme, the PAHO merit award for a documentary on HIV AIDS and the Barbados Association of Journalists award for best short feature in television. In 2007 he was presented with the Clement Payne Award and in 2010 he received the Oshe Emeke Award from the Barbados Commission for Pan African Affairs, both for outstanding professional contribution to Barbadian society in the field of broadcasting. In his more leisurely moments Olu enjoys playing the piano and writing. He is the author of two books of children’s verse, THE CHILDREN’S VOICE and WEST INDIAN NURSERY DRAMA. WESTMINSTER’S JEWEL is his first adult work. Apart from writing and playing the piano he enjoys choral singing and does so with a group called the Cecilian Chorale.