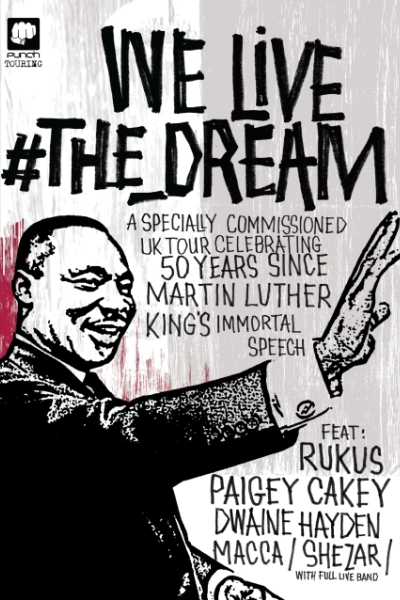 “WE LIVE #THE_DREAM” is a specially commissioned UK tour which celebrates the 50th anniversary of Martin Luther King’s “I Have A Dream!” speech.

King’s speech remains a powerful expression of one person’s passion for justice and freedom, and for equal rights under the law in the USA. Today, these ideals are back into the headlines again with the current protests over the shooting of Trayvon Martin and the highprofile quarrel between JayZ and Harry Belafonte over the importance of giving something back to society.

“We Live #The_Dream” brings together breakthrough artists including Rukus, Paigey Cakey, Shezar, Macca, Dwayne from the TTB band to create and perform powerful and exciting new material that revisits a legendary icon of Black History and Civil Rights and connects with today’s HipHop, Soul and Grime audiences.

“We Live #The_Dream” is a 6 city UK tour that will bring five of the freshest acts on the UK Black music scene together for the first time, with new compositions and collaborations that reveal how the words of this oftenquoted speech have helped shaped the world we live in today.