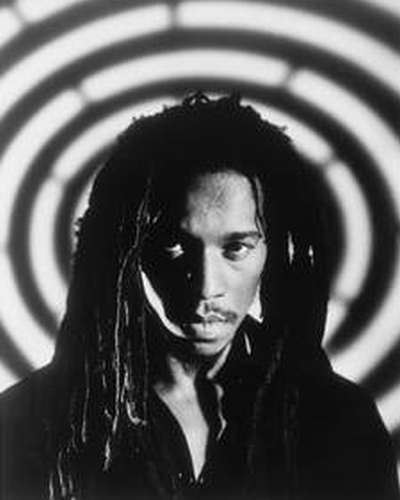 Benjamin Zephaniah, published his first book of poems, ‘Pen Rhythm’, in 1980. Since then he has become a permanent fixture on contemporary English literature, focusing on a wide range of political and social issues. Journalist Daisy Greenwell speaks to Benjamin Zephaniah about poetry, life, rasta and the future.

When did you first start writing poems?

I don’t really know. That’s a trick answer to a very simple question really. My mother said that as soon as I started to use language I started playing with words. I just loved the way that words sounded and I’d play with them. When I was 11 I did my first performance. I didn’t learn to read and write until I was 21. I had my first book published before I could read and write. I got a girlfriend and I told her the poems and she wrote them down. So I started saying poems at five, performing them at 11, and the answer to your question when did I start writing poems is 21! A trick answer to a very simple question!

You’ve always had very strong views on everything, where do you think that comes from?

It’s a really difficult thing to answer, maybe it’s from my very early experiences. The first school I remember was horrible. Kids used to pick on me like crazy, and there was no sense of an anti racist policy. The teachers were just as racist as the kids! I was beat up one day by a group of kids because Cassius Clay had beat up some white guy, and I remember the teacher going to the sink and washing the blood from my nose and laughing at me saying ‘it’s so strange, you’re so black but your bloods the same colour as mine.’ Then he said ‘well I suppose chimpanzee’s blood is red aswell.’ so that sense of injustice was always with me.

When I was about 13 I started getting in trouble with the police, and some man said to me pull yourself together, get yourself an apprenticeship and stop losing your temper. I remember saying ‘what am I supposed to do? What’s the deal with this life thing?’ He said look, you’ll soon be leaving school, get an apprenticeship. In them days there was no way black people were going to university. Black man in England – car mechanic, painter decorator, find yourself a nice girl, preferably Jamaican, work every day, have the weekends off, make a few babies, get a house, every week you pay into your pension and then you retire. I seriously remember going away from that and thinking if that’s the deal I’m gonna kill myself. If that’s what it’s about then fuck it. I was so serious about it.

Then I thought, no, I can see another purpose for my life, I’m gonna get my poetry together and I’m going to do something. If I don’t have a house, and I don’t have a wife and I don’t have a pension, but I can save a few lives then that’s good enough for me. I just wanted to help people, and I actually thought if necessary I will be a freedom fighter. I’ll go to South Africa and join the South African army, I’ll go to Cuba. I’ll help old ladies. I’ll help the blind, I’ll do anything, but I can’t just live my life about me and a woman and two children. I wanna save women, I wanna save children you know. And I still feel pretty much the same actually. So in a sense I can honestly say poetry saved my life.

Are there any performers or musicians around at the minute who are inspiring you?

Prince is one of my all time favourite artists. People usually get surprised when I say that but if you listen to prince really well… I mean, he must be the sexiest bloke I know. He’s the only guy I know that makes me think shit, why can’t I be gay or be a woman or something? Why can’t I get a piece of that? He combines a real sexiness with political awareness. He does this really romantic song for example where he talks about what’s happening in this room with the love that him and this woman have, and how can we send it to Iraq, really clever. I really like listening to classical music too.

What book are you writing at the moment?

It’s just a nice tale of every day folk…about a kid who kills his teacher. The first sentence is like ‘he took the knife and stabbed it in his teacher’ and so I get that bit over with, and then the rest of the book is what brought him to it. You realize that he’s been abused and bullied.

What sort of a situation would you want your latest album ‘Naked’ to be listened to? I do believe that it is possible to dance and still have your brain engaged at the same time. So I’d like to think that it’s intelligent dance people who indulge in sex every now and again and go on demonstrations.

The title track Naked is quite a powerful song…

Yeah and probably, its difficult to say if it’s my favourite but it’s up there. It’s one song/poem where I really wanted to fuse the political and the personal together, and I really wanted to, like it says on the tin, strip myself naked. I think men have this inability to really express their emotions unless they’re saying baby I love you, baby if you leave me I’ll cry, things like that.

I was writing the poem and I thought I wanna start with ‘dis is me naked’ and then I wanted to express that nakedness. And when you start like that it’s a lot different from doing something and saying at the end of the sentence ‘I felt naked.’ If you start the sentence with it you’ve really got to back it up. There’s no no go areas in that poem, that’s why it jumps from talking about the government to talking about my infertility and the feelings about my mother coming over from Jamaica and me wanting to be a cop beater, you know, it really kind of gets inside me.

You famously turned down the OBE. What would you say to those other black Britons such as Trevor Phillips who’ve accepted the OBE and say you’re disrespecting them by refusing it?

I’d say, there are so many people in the black community who are talking about an independent black movement of people who will not just bow down to the Queen and Tony Blair, they will stick up for the rights of black people. Him going and accepting it is dissin’ black people. If I walk down the street, it wont take long before somebody comes up, they’re usually Black or Asian though sometimes they’re white, and they say thank you, your so brave. And I don’t think I’m brave, I just did it It’s about time somebody stood up to them. Everybody says I wont do it but then they get asked and they go and bow down to the queen. The black community thought it was a breath fresh air. The only black people I’ve ever heard complaining about it are those who’ve accepted it.

Trevor Phillips and other people must learn that regardless of what they think, the truth of the matter is that the majority of the black community in this country see them as what we call ‘houseslaves’. They stay quiet on the big issues that matter to black people. One is the war, the other issue is the deaths of black people in custody. Trevor phillips has stayed mainly silent on this. It’s sad, he’s an old friend of mine. I knew his girls, his wife, I used to go to his home, it wasn’t like I was just acquainted with him. It’s the power again. I know it’s only the commission for racial equality, but being given a hotline to Tony Blairs office can affect you.

Are you a Rasta?

Yeah, my family’s Christian but I became involved in the Rasta movement when I was about 11. It’s a very broad church, you’ve got Rasta’s who are very politicial, Rasta’s who are very spiritual, Rasta’s who go by the word of the bible, Rasta’s who will never read the bible. Sometimes Westerners find it very hard to understand, they think it’s just marijuana and music, which is a very simplistic view. I don’t smoke and I do like reggae, but it’s not my favourite music.

I’m a progressive Rasta in that I think we should be writing the third testament, not living in the second. But I just think religion, it’s killing us. It restricts our thinking. It’s really good to have doubt, and it’s very dangerous position to be in when you have somebody saying, I know because it says so in the Bible or the Koran and I don’t even have to think about it anymore. Religion has given god a very bad name. I think god would really disapprove of religion, just like Marx would disapprove of Marxism. Christ wouldn’t even be allowed into most churches now! A black Palestinian with sandals and probably dreadlocks, a cross between Arafat and Bob Marley. People think Christianity is a Western religion, actually is a north African, south west Asian religion.

What do you hope for yourself in the future?

The only things that spring to mind are really obvious. I’d like to end the war in Iraq, I’d like to make Trevor Phillips black again. If I die tomorrow I could honestly say that looking at where I started from I’ve done my bit you know. Today I received the Spanish translations of my first novel, they’ve been translated into about seven languages now, and I don’t know if that’s good or not, some people have hundreds, but I just thought god! And I do kind of think if I die now, and someone was trailing through my room trying to put my bits and pieces together, they’d go yeah, he did well. I’m really paranoid about growing old alone, cos I live on my own, I ain’t got no girlfriend, it’s one of my biggest fears. You see, that would never happen in Jamaica, know matter how old you are. My grandma was 110 when she died and she was never alone, never alone.