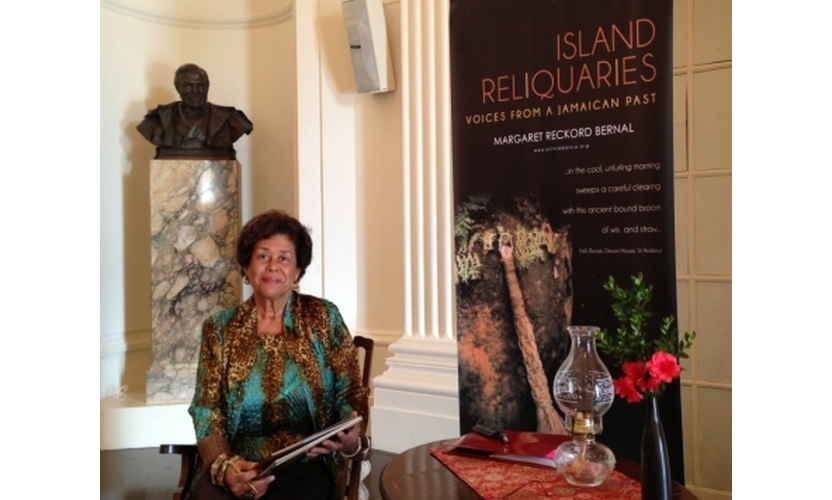 Voicing Jamaica’s Past to Serve the Future

As a Caribbean sociologist, writer and cultural heritage specialist, Margaret Bernal masterfully combines her skills as a poet and a curator in her new book, Island Reliquaries – Voices from a Jamaica Past, published in March 2013.

This book harnesses her curator’s role of developing a dialogue between Jamaica’s past and its present, by sharing her personal impressions of some striking visual treasures through her poetry. Island Reliquaries, the first in a series, is published with sponsorship by Jamaica National Building Society, and will be officially launched on June 20, during Caribbean Heritage Month celebrations in Washington D.C., in the United States of America.

“I want to increase self knowledge among our people,” said the BBC Caribbean Poetry prize winner in an interview. “This book was written as a reminder that we have been given a country which is unparalleled in its cultural heritage.”

Released in a limited edition, the book is illustrated with photographs of objects with powerful cultural resonance, captured on locations around the island. Whether looking at a saddle, a tray, or lamp, she penetrates the meaning of these objects in Jamaica’s human landscape.

“I have been conducting oral history interviews over the last 30 years,” she said. “I talked to people about the things which are meaningful to them, in their lives and I researched the meanings.”

One object which she explores in the book is a saddle from a family in Boundbrook, in St. Thomas. On visiting Boundbrook, she found a place which was, “lost in time, and had regressed from the period when it had a busy banana wharf.” The saddle also represented a period where Jamaica was a land of enormous social distances. The resulting poem, she said, “aimed to evoke the spirit of that time and place.”

Earl Jarrett, General Manager of JNBS, noted that the Society has consistently sought to support projects which document Jamaica’s visual arts and cultural heritage. “Mrs. Bernal has created a quality product of international standard and we are delighted to lend our support”.

Mrs. Bernal pointed out that the country is so suffused with poetry and art, that there are talented persons who are producing creative works, but do not recognize themselves as being poets or artists. Putting together her own artistic expression through the current book took 30 years to accomplish, she said. “It is something I worked on every day… Every writer has a process and that is my process.”

Proceeds from the sale of ‘Island Reliquarie – Voices from a Jamaica Past’ will go towards funding Arts Jamaica, a project aimed at building job skills and fostering greater knowledge of Jamaican’s cultural history among the young people.

Copies of the book can be ordered at IslandReliquaries@gmail.com. A book launch is being planned for Kingston, Jamaica, just ahead of Emancipation and Independence Day celebrations.