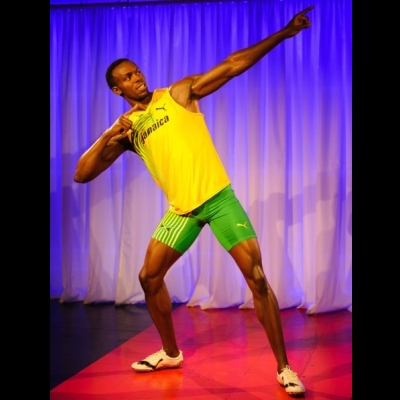 Usain Bolt was commemorated this week with his very own wax work and itzcaribbean was there to witness the special event. We arrived at dawn and were quickly ushered up to the private room where the life size figure was displayed in his iconic ‘To Di World’ pose.

Towering over us at a huge 6ft5″ the 5 time world and 3 time gold medal champion was a sensation in wax as we donned his national flag and joined the figure centre stage for the worlds press.

The Jamaican sprinter was then moved to Madame Tussauds Interactive Sports Zone, where he joined other models like Tom Daley and Jessica Ennis and looked right at home with a painted stadium behind him.

On getting up close and personal with the wax work one of our winner’s, Tamarah Vansanten commented on how real the figure looked in person “I didn’t expect it to look as much like him as it does, everything from the curls in his hair to the colour of his skin is so life like, it really is fantastic.”

Another of our very own winners, Sorcha Gavin who is a 100m sprinter herself, was delighted to meet Usain’s double. “It’s always exciting when Bolt competes in an important race and he is about to run the races of his life. The eyes of the world will be upon him and the whole of Jamaica is willing him to win. It has been brilliant to come here today and wish him luck in this special way. His figure is amazing. It’s just like standing right next to him!”

The models reported to have taken 4 months to replicate with 12 people working hard to make it as realistic as possible costing an estimated £150,000. Usain unfortunately couldn’t join us for this special event but he has been shown a picture of the final figure and is said to be ‘very pleased with its outcome’.

With the Olympic Games about to commence this is a poignant moment in history for Britain but maybe no more than it is for the British Afro Caribbean community with another of our winners Sharan Sanduh commenting on that the fact that “It’s been a struggle for the community since the riots of last summer and someone as inspirational as Usain Bolt is a wonderful role model for all our youth, it shows that that no matter your background and your up-bringing you can still achieve the impossible you can still become the fastest person in the world!”