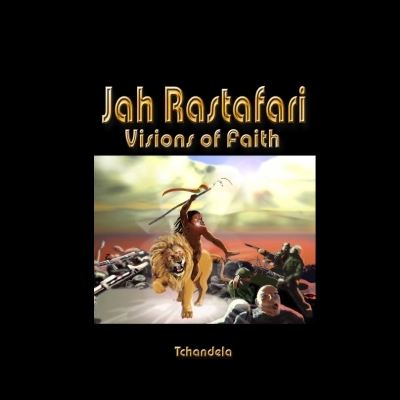 Looking at the development and movement of Rastafarian Philosophy

Tchandela is a Rastaman, born in Jamaica and grown up in the UK since the age of eleven. He graduated from the University of Brighton with a B.A. Honours Degree in Fine Art and at present is an author and business entrepreneur.

Tchandela explains, “These are only labels however, as the core essence of my awareness and actions as a human being, in reality, defies such categorisations. I prefer to refer to myself as a Soul-Freedom Fighter and Cosmic Explorer”.

The book takes a challenging look at the Rastafarian movement and postulates progressive ways in which peace and unity could potentially be achieved among us as a people and the world at large.

Jah Rastafari Visions of Faith, looks at the development and movement of Rastafarian Philosophy and systems of ethics. The book analyses the structures and prevailing assumptions of Rastafari.

The spiritual creed of the Rastafarians (Rastas) of Jamaica have, over the past four decades become a very visible symbol of black cultural struggle for identity and unity internationally by virtue of world renown Rasta Reggae musicians such as Burning Spear, Culture, Bob Marley and the Wailers and many others.

Jah Rastafari – Visions of Faith is an analysis of the phenomenon of Rasta; its birth as a reaction to black racial oppression and the search for a viable avenue for its adherents to reconnect back to an African spiritual perspective. Taking into account the widely held misconceptions about Rastas and the sometimes negative connotation associated with the movement, I dissects the rationale for accepting the emperor Haille Selassie I of Ethiopia as God incarnate and the prevailing ideology of Judeo/Christian biblical philosophy as a means to solidify faith. The emphasis here is to see the dynamics of Rasta as an offshoot of much older African/Jamaican spiritual systems, directly influenced by an African spiritual heritage stemming back many thousands of years into the past.

This thesis delves extensively into areas of interest to all Rastas such as Conspiracy Theories, Racism as a tool of social control and it’s psychologically effects upon black and white populations; social and ‘spiritual engineering’ by the establishment of church and state; the Mind Control Programs of the Babylon System and the coming establishment of a fascistic New World Order by the Euro/American white supremacist Illuminati organization. All these things are crucial elements in Rasta philosophy. These ideas have always been central to Rasta and elucidate a clear and conscious paradigm of Rasta philosophy from the very beginning of the movement and expanding the frontiers of pertinent knowledge beyond the existing formula of the creed.

The argument here is aimed at an imperative shift towards a more holistic vision of Rasta faith, taking its rightful place in the centre of progressive human consciousness as a powerful, positive evolutionary force. This evolutionary force is designed to liberate the minds of human beings from the shackles of ignorance and illusion thus elevating the soul towards its highest goal; the joyous communion with Jah Rastafari, the Supreme, Eternal, Formless Potency of All Being.

Get your copy today from Jah Love Publishing