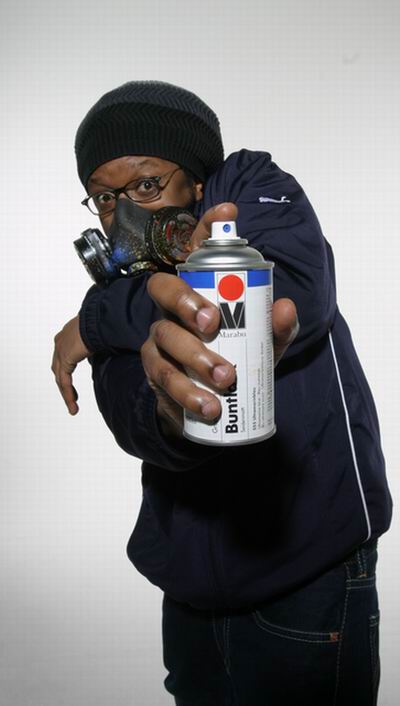 Dzifa Benson talks to Jonzi D, about his show. TAG…Me vs. The City.

For TAG, Jonzi has brought together an awesome group of collaborators. The show features some of the UK’s finest Hip Hop dancers, an original sound-score by DJ Pogo (The En4cers, Block Party Breaks), state of the art video animation by Ben Wachenje (the7Samurai), lighting design by Jonathan Samuels and set design by infamous graffiti writer PRIME and Sculptural Graffiti.

D: So Jonzi D, tell me, what is your new show at Sadler’s Wells TAG…ME vs.The City all about?

JD: It’s about a graffiti artist. It came from an idea I had in ’99 when I was doing Lyrical Fearta. I worked with a graffiti artist called Prime who designed the backdrop for the show and dealing with him made me want to tell a story of what it was like to be a graffiti artist. Their shit is mad underground. Mad incognito. I was interested in the psychology of why someone would want to do that. TAG is an exploration of that using music by DJ Pogo, Benjamin Wachenje is doing the animation who usually does all my flyers and graphic. It’s a visual and abstract piece and a bit of a departure from my usual stuff.

D: What is usual?

JD: That’s a good question. I guess I don’t have a usual really. I�ve done nightclubs especially back in the mid nineties when the club that’s now called Neighbourhood used to be Subterrania and it put on Rotation on a Friday night. I’ve done the spoken word thing, performances to live music with the likes of Courtney Pine. People also know me as an actor/dancer in the theatre. TAG is mostly a departure because its the first time that I am directing a production which I dont feature in.

D: Do you usually direct your own productions?

JD: Generally, yes. I might have had people assisting me and stuff like that. But the self directing thing can be limiting. TAG has been good because it has given me a chance to stand back and see things as a whole. Another way that it is a departure is that it is not as text laden as some of my past productions.

D: Yes I’m quite intrigued by the idea of using the body to depict a spray can? How have you managed that?

JD: Banksy the character in the piece is coincidentally called Banksy just like the famous graffiti artist is almost like a puppet master and he uses this power to paint shapes on the stage. We are also using dance techniques like robotics, body popping and waving to create a sense of liquid, dripping paint.

D: What has been challenging about trying to depict graffiti art in this way?

JD: Sometimes I imagine stuff that can�t be done unless you are using CGI effects. But I enjoy the idea of imaging that we can make those things real through the use of great dancers, lighting, music and animation to make it all come together. Also the audience has an important part to play in that because before they watch the show, they’ll have an idea or at least enough cultural references to play a part in making it all come together.

D: But what if your audience doesn’t know anything about graffiti art, about hip hop?

JD: Then they can enjoy the movement of the dance just for the sake of it, the music too. Banksy is creating a little world of a train yard. He takes extreme risks to get his name out there, to make sure people recognise his tag. I hope the audience can pick up some sense of emotional weight from depicting his story and what drives him. I get very excited about how people perceive things. Devising a production takes me on a journey of discovery and I hope that I can take the audience on that journey of discovery as well.

D: So why was it important to tell this story?

JD: I love graffiti art and I love the way it flows on to a wall. It moves in a way that theatre moves and I felt excited about tackling that idea. I used to do a bit of tagging myself and I remember there is a really beautiful thing about calligraphy. Being a graffiti artist is almost like being a super hero. In the daytime you walk around with this alter ego but at night you are free to be who you really are inside.

D: I have to say thats the first time I’ve heard graffiti described as calligraphy?

JD: It is a global form of calligraphy. It is a very empowering culture as is hip hop generally.

D: Is this a bit of a departure for Sadler’s Wells? Most people still associate it with ballet.

JD: Sadler’s Wells programme has definitely become more diverse over the years.. They now have a programme that isn’t just about classical European work. And I am bigging up Alistair Spalding the artistic director at Sadler’s Wells. I knew him when he was working at the Royal Festival Hall. So when he got the job at Sadler’s Wells he asked me to come up with something for its programme. They want good, exciting, new work. And the people who work there are mad cool as well.

D: It may seem like a really obvious question but what exactly is hip hop theatre?

JD: Hip hop culture is not some abstract thing. It’s out there and part of the mainstream. This is just another example of that. It is the biggest selling music form in the world. For me, theatre has opened up the floor to what hip hop means and what it can express. Not many people use it but I say hip hop theatre because I want to describe what I do. It encompasses my style and the way I create my art.

D: You trained as a dancer. Was it hip hop that led you in that direction?

JD: I was into hip hop in 1979, way before I started training to become a dancer. It�s always been there. In performing dance classes in secondary school, I started using hip hop choreography. I studied Philosophy, Government & Politics, Sociology and Economics at A levels. Halfway through I escaped from that and focused on what I liked doing. I got into London Contemporary Dance School about a couple of years later and found that I liked it because there was always a sense of searching, of a narrative, of going beneath surface of artistic expression. It was not like the hip hop world in the traditional sense but it shared with hip hope the creativity and the desire to do things differently.

D: How does the bud of an idea transform into a full blown production?

JD: Sometimes the idea creeps up on you. The sources are so varied. For instance, I did a piece about a gun during Lyrical Fearta. Just holding the gun and the potential of what could be done with it gave me a feeling of power, almost sexual power when I first held the gun. Which then led me on to ideas of gun violence, gun fascination and masturbation. I don’t believe in violence, so mild mannered me felt like I could be a gangster just there and then. The piece developed from there. Aeroplane Man, another piece I did was about displacement, about a young man of Grenadian background being brought up in east London. I feel I have as much claim to this piece of land as anybody else. I support the England football team, I pay rent here, I love this country, my friends are here. My experience of England has always been a multi-cultural one. The was world on my street yet that doesn’t take away from my being African.

D: So what would you say to young people coming up? Do you find yourself serving as something of a role model?

JD: It is a bit of a sensitive thing to define myself as that. I am imperfect, I make mistakes, I’m a human being. For that reason I am role model but not everyone sees it that way. I go to schools and referral units, resistance may be there at first I try to move things forward and can see that young people can relate to that. Sometimes it might be a girls’ school in Berkshire and that gives me a chance to show what it’s like to be black and male. If young people look up to me, I feel I deserve it. I’ve worked hard for it. There were times when I was broke but I stuck with. But you’ve got to know where your strengths are. Don’t stick at something you are clearly no good at. Keep working at your game, man and believe in it. We are always forced into corners and now they are locking down on us. Don’t get into that cycle, don’t be hood-winked and bamboozled by the glamour portrayed in the hip hop videos.