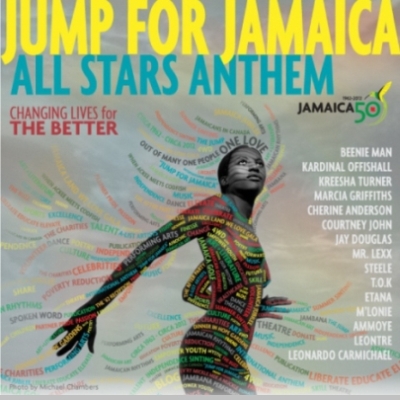 Artists unite to celebrate the 50th anniversary of Jamaica’s independence

Artists unite to celebrate the 50th anniversary of Jamaica’s independence from Great Britain, encouraging listeners to ‘Jump for Jamaica.’

As a first of its kind, the ‘Jump for Jamaica’ song features premier artists from Jamaica (Marcia Griffiths, Courtney John, Mr. Lexx, T.O.K., Etana, Beenie Man and Cherine Anderson), as well as Canada. Hip Hop Icon Kardinal Offishall adds his patois infused Bakardi slang, while Canada’s songbird, Ammoye, lends her smooth vocals singing “out of many people / we are one / come together / old and young ….”

By participating on this song, Ammoye makes Canadian Reggae history as being the only female Reggae singer from Canada to perform with legendary artists Beenie Man, Marcia Griffiths, Cherine Anderson and Courtney John together on the same song. Ammoye will also join the Gala event being held at the Sony Centre for the performing arts to perform the song with the legendary artists.

When asked about her contribution to the song, Ammoye said “this project reflects our pride as a people, our solidarity as a people, and the worlds’ recognition of our people! This is our time to shine, and I’m glad I had the opportunity to do so with so many great Jamaicans!”

Included to represent the Jamaican Canadian voice are Steele, M’Lonie, Jay Douglas, Leontre and Leonardo Charmichael. Collectively, the chorus of voices does the island proud!