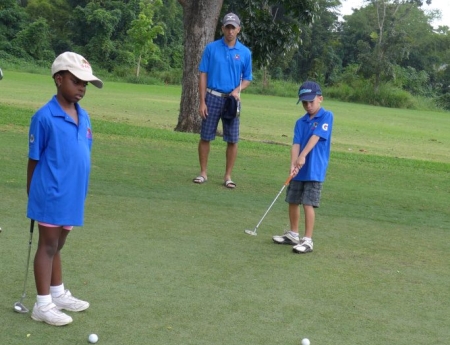 Could Jamaica produce the world’s next Tiger Woods?

The country has some of the best runners, cricketers and netballers, but its pool of golfing talent is largely untapped. National golf coach, Jason Lopez, wants to see that changed.

“Our younger players are getting better every year,” Mr. Lopez states. “We will eventually develop a star who emerges as a leader in the sport.”

Last year, Kei Harris finished second in the Girls Under-13 age group at the July Caribbean Golf Championships in Cayman, while Justin Burrowes finished fourth overall for the entire region. The coach said that Tiana Cruz was another junior player to be reckoned with.

Jamaica is developing a track record of producing young golfing talent, with Jonathan Newham, now in college in North America, preceding the present group, Mr. Lopez said, in an interview at the 13th Annual SANTA Golf Tournament. The Tournament was held in December at the Constant Spring Golf Club in St. Andrew.

Just as in any other sport, its development depends on the existence of a successful programme at the junior level. Thus the sprinting superstar Usain Bolt, began showing his athletic talent at his primary school in Trelawny, while Tiger Woods first appeared in the pages of Golf Digest at the age of five.

Aditi Dhiman, General Manager of JN Finance, and one of the organisers of the Santa Golf Tournament, pointed out that, “juniors are a major part of the tournament. Older golfers cannot play forever, so the sport would die unless we encourage the development of young players.”

She pointed out that her own son, Aman, seven years old, was participating in the tournament as one of the juniors.

Aman, who described himself as an “average” player, has been around golf courses since the age of two. Asked how he felt about golf, he said, “this is fun.”

His friends, Brady Holmes and Kennedy Brown, also junior competitors in the Santa Golf Tournament, both agreed that they love the sport. Their only difference was that Kennedy thought she was a good player, while Brady assessed his talents as being awesome.

But only four out of their preparatory school class of 25 are golfers, Kennedy states.

“If they don’t enjoy the sport, the children will lose interest in it,” declared Mrs. Dhiman, who is herself a golfer. “You must encourage them but not push them too much, as not every child is keen on golf.”

Coach Lopez pointed out that successful players have to work hard to improve their game and be diligent at practice. He said, “This is a difficult game, requiring focus and concentration.”

Golf appeals to a particular personality type as it is an individual sport, “where everything is 100 percent on your shoulders,” the coach said. “It is a very mental game and you have to be determined to play it.”

One key factor hampering the development of the sport is that it does not get a great deal of the financial support. “Much of the financial burden of the national team junior team falls on the shoulders of the parents.”

He started out at the Constant Spring Golf Club as a six year old, and ultimately went to Florida State University on a golf scholarship. The coach said, “It is a great sport.”

And, despite perceptions, it is not a sport of the elite, he points out. Many Jamaican parents have the resources to afford their children an exposure to golf, but they are unaware of their options, and the opportunities it can provide.

Coach Lopez points out however, that only a few of the golf courses around the island, such as the Constant Spring Golf Club, offer programmes to develop young golfing talent. He adds, “We need to change this.”

Some 27 of the more than 150 players participating in the Santa Golf Tournament were juniors, and the event raised just under $2 million for charity, Mrs. Dhiman said. “I am delighted with what SANTA has accomplished.”