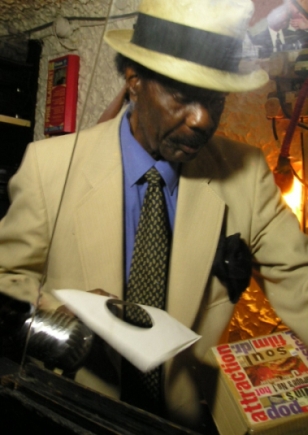 The legendary Jamaican soundman Duke Vin, passed away on Saturday 3 November 2012, A pioneer who influenced the introduction of sound systems and Ska music to the UK.

Duke Vin, along with fellow legend Count Suckle, arrived in the UK in 1954 from Kingston Jamaica and couple of years later their sound of ska was to become hugely popular and would significantly influence the UK music scene.

By the 1960s Duke Vin was playing out at many of the famous West End clubs as well as at private parties and halls around the country.

His legendary vinyl collection took him around the world and he continued playing his selections of Jamaican rhythm & blues, ska, rock­steady and reggae from the 50s, 60s and 70s up until just a few years ago, despite being in his eighties.

At Notting Hill Carnival ska fans would often be treated to a set on Talbot road at Gaz’s Rockin’ Blues Sound outside the Globe Nightclub.

Salute to DUKE and all the other legends unnoticed or under appreciated.

The Funeral will be held on Friday 23rd November 2012 at 11am at St. Augustine Church, Kilburn Park Road, NW6 5XB followed by the cemetery at Kensal Rise Cemetery, Harrow Road W10.

The Reception will be held at the Kensal Community Hall, Kensal Road, W10 5BJ