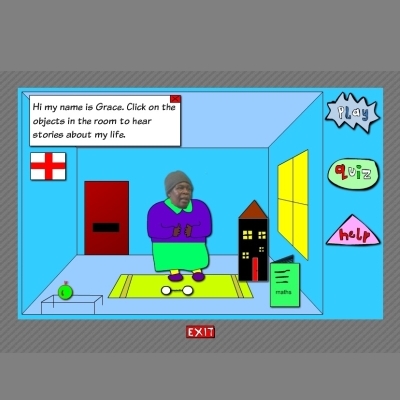 A group of young people from St Paul’s, Bristol have produced an online computer game SP3D, to educate their peers about the history of their area, with Malcolm X Elders group and have been nominated for a prestigious First Light.

The teenagers interviewed and recorded their elders talking about their lives and how they came to live in St Paul’s, after starting life in the Caribbean islands. They then set about turning each elder into a computer game character that others can interact with online. They take gamers on a tour of a 3D world modeled on St Paul’s where games players can meet the elders, play games, hear their stories, and watch films. The object of the game is to meet each elder then answer a quiz to gain part of a code. When the code is collected gamers can enter the Malcolm X centre where a surprise awaits them.

Other young people across the world can learn about what life was like for people arriving in England in the 50’s and 60’s in a way that is appealing to them, promoting a greater understanding between young people and the older generation.

As part of the ‘Best Mediabox Innovation’ category, sponsored by Mediabox, the group will be judged by presenter Rik Edwards (T4), director John Crowley (Boy A) and presenter Miquita Oliver (T4) and are up against other nominations from Wolverhampton.

Hosted by Dick and Dom, the ceremony will be attended by a mix of film industry luminaries and celebrities who will present the awards across a range of categories including Best Animation, Best Drama, Best Screenplay, Best Comedy and Best Original Music. This year’s event will take place at ODEON, Leicester Square, London on the afternoon of Tuesday 2 March 2010.

This year’s event includes a newly created Open Access Award, in association with BAFTA which will be voted upon by members of the public.

Dick and Dom said: “We-re really looking forward to presenting the First Light Awards in March – it will be a lot of fun; all of the nominated films are fantastic and the awards will be a great celebration for everyone involved.”

First Light provides funding and expertise to enable five to nineteen-year-olds, from all backgrounds throughout the UK, to make their own short digital films and media projects. First Light is supported by the National Lottery, through the UK Film Council and by DCSF. This year, the organisation will distribute £5.3 million. Since launching in 2001, First Light has funded over 30,000 young people to produce more than 1,000 films and media projects.

Through First Light, young people are given the opportunity to work alongside industry professionals and are involved with every aspect of the creative and technical process.

Barbara Broccoli, First Light Chair remarked: “First Light does a hugely important job in nurturing young people’s creativity. The quality of this year’s nominations is impressive and highlights the enormous amount of young talent within this country. Through First Light young people are given an opportunity to have their voices heard by telling their stories through film. This process enables them to learn important skills and build confidence and self esteem”

John Woodward, Chief Executive Officer of the UK Film Council commented: “Congratulations and good luck to all the young people whose excellent films have been nominated for this year’s awards. First Light is a hugely valuable organisation that the UK Film Council is proud to support. It does great work right across the UK, teaching young people from all kinds of backgrounds to work together creatively, make films and learn valuable digital skills.”