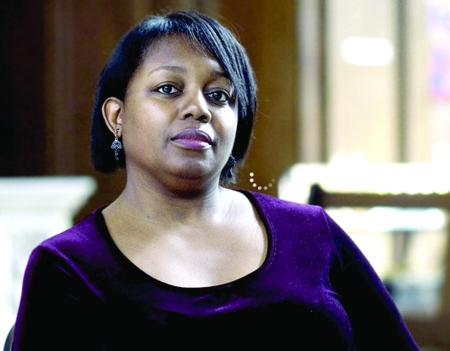 Children’s author and literacy campaigner Malorie Blackman has been named as the most influential black person in Britain. She tops the seventh annual edition of ‘The Powerlist: Britain’s 100 Most Influential Black People’, launched at a star-studded central London event.

Published by Powerful Media, the list is sponsored by Lloyds Banking Group and Thomson Reuters and selected by an independent panel, chaired by Vivian Hunt, a Director at McKinsey & Co. Nominees must be of African or African Caribbean heritage, born or living in the UK, and are selected on the basis of their ‘ability to alter events and change lives’ at the very highest level.

The top ten for 2014 also includes a financial adviser, a CEO, two MPs, a barrister, an Olympic athlete, an artist and film director, an actor, a civil rights campaigner and a space scientist. The rest of the list covers a wide range of professions from of engineers to investment bankers.
Introducing The Powerlist 2014, Prime Minister David Cameron wrote:
“I want the United Kingdom to be a land of opportunity. A land where anyone, regardless of their race, faith or background can make it to the top of every aspect of life. Role models – many of whom appear in the pages of this publication – play a huge part in this. Their stories inspire and enthuse younger generations into emulating and even surpassing the achievements of those they admire.”

Born in London in 1962, Malorie Blackman trained in computer science and worked in computing, before publishing her first book at the age of 28. She has since written 60 books for children and young adults, often addressing issues which resonate powerfully with her readers, such as an organ transplant in ‘Pig-Heart Boy’ and race relations in the ‘Noughts & Crosses’ series. As the new Children’s Laureate (a two-year appointment that started in June 2013) she has already been quoted in the media speaking out against the closure of libraries and new policies in state education, whilst advocating for a “more inclusive society”.

Malorie Blackman comments: “I am deeply honoured to be chosen as Number One on the Powerlist. Highlighting so many black people in such diverse different spheres is such an inspiring thing. It challenges stereotypes and shows that many people that are achieving great things. It’s a fantastic showcase of the amazing success stories that often go unreported. It’s a real honour to be among such company.”

In second place on this year’s list is Ken Olisa, who runs his own boutique technology merchant bank, Restoration Partners, and is a non-executive director at Thomson Reuters. This year he led the flotation of Outsourcery on the London AIM exchange, raising £13m and achieving a market cap of £40m as the first technology IPO in London. His philanthropy work has included a £2m donation to a new library at Fitzgerald College, Cambridge, opened in 2010 and this year renamed The Olisa Library.

Matthew Ryder QC, one of the UK’s leading criminal, public law and human rights barristers, is in third position. With a practice which focuses on the overlap between crime, media and information law, he has represented several witnesses before the Leveson Inquiry, as well as many journalists and others under investigation. Last year he represented the family of Ian Tomlinson, the newspaper seller who died in G20 protests in 2009, secured an appeal for the ex-chair of the Black Police Association Ali Dizaei and won appeals for 20 environmental protestors arising from the activity of undercover police. He is currently lead counsel in claims brought by Liberty relating to both US and UK internet surveillance operations disclosed by NSA whistleblower Edward Snowden.

The Powerlist is published by Powerful Media and also features a list of 25 Africans who are changing the Continent, as well as exclusive interviews with men and women who made the list and a top 10 of the most important black films ever made.

Michael Eboda, Founder and CEO of Powerful Media Ltd, said: “The Powerlist provides 100 role models for young people from across a wide range of fields of achievement. It is sent to schools across the country so that pupils can see successful people from backgrounds similar to theirs who have achieved at the highest level. It breaks down a lot of stereotypes.”