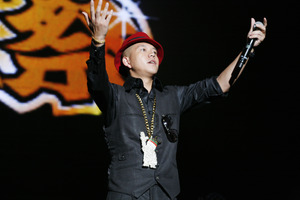 A whopping crowd of more than 40,000 Japanese fans descended upon the Yokohama Reggae SAI music festival in early September to celebrate Mighty Crown’s anniversary in the business and the landmark 15th anniversary of the event.

The vibes were incredible in Yokohama, Japan, as Japanese dancehall enthusiasts were indulged with a performance by Dancehall legend Barrington Levy. A sea of fans embraced Barrington Levy, as he delivered an impressive set consisting of hits including “Here I Come,” “Murderer,” “Unda Mi Sensi” and “Too Experienced.” Levy went on to rip “Living Dangerously” by flawlessly performing Bounty’s part. And of course, the crowd went crazy each time Levy dropped his signature scat “didleydidleyooooh.” For Levy, this was an exciting return to Japan after being away for more than 20 years.

Also a special guest, not advertised, Half Pint amused the crowd with an array of selections like “Level the Vibes,” “Crazy,” “Landlord” and “Win Some.” Half Pint closed his well-received set with his epic smash “Greetings.”

As “The Far East Rulers” have elevated Dancehall music and culture in Japan to unprecedented heights, Yokohama Reggae SAI is an ideal glimpse of how enormous Mighty Crown’s position is in the country. The event reached an all-time high when founding Mighty Crown members Masta Simon and Sami T took over the stage with a live and direct, 8-round sound clash. With their claim to fame as a worldwide clashing sound system, no stone was left unturned. The brothers battled, introducing a new theme in each round. They even unleashed video dubs in one round. While Sami played a video dub of Beenie Man that dissed Simon. It was a TOK dub that Simon entrusted to fire back at Sami. The response was great!

In addition to the concertgoers lending their un-interrupted attention to Mighty Crown, the crowd roared in excitement when a legion of Japanese artists graced the stage. Artists Pushim, Ryo the Skywalker and Fire Ball were among the best received. Boasting dynamic performances, Fire Ball surprised the crowd with an end-of-show, special guest Daville. The Jamaican Reggae singer enticed the audience with three of his songs. Known for donning crisp vocals, Daville was a hit.

“This was another great year of Yokohama Reggae SAI.” said Masta Simon, co-founding member of Mighty Crown. “Each year, the event increases in popularity….drawing more and more fans to experience an international Reggae Dancehall experience. “The awareness of the event is also soaring in Jamaica,” added Mighty Crown’s manager Garfield “Chin” Bourne of Irish and Chin.

The 15th Yokahama Reggae SAI went out in spectacular style with a fireworks display that was out of this world. Mighty Crown was quite pleased with the show’s success. And what made the event extra special was the official Japan release of the Mighty Crown Dynasty High Nike sneaker. Focused on the future, Mighty Crown’s Dynasty High Tour is set to jump start in October. Always bridging the gap between Japanese and Jamaican culture through the power of Reggae music, for Mighty Crown — the sky is the limit.

The Yokohama Reggae Festival SAI has become Japan’s largest Reggae music concert. Over the years, what reads like a who’s who of the Reggae music industry have taken center stage at the epic event including Beenie Man, TOK, Wayne Wonder, Voicemail and many others.