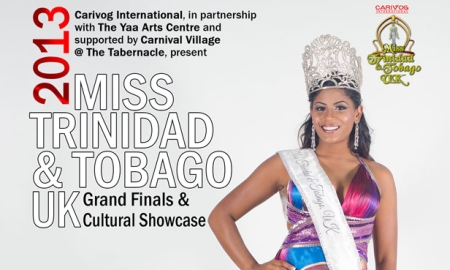 Miss Karimah Farrell, representing the island of Tobago and sponsored by the Tobago House of Assembly, was crowned Miss Trinidad & Tobago UK 2013 on Saturday 28th September 2013 at the 11th Annual Pageant staged in London.

Miss Trinidad & Tobago UK is a unique pageant that highlights not just physical beauty but also the talents of its contestants as Ambassadors knowledgeable about the country and capable of representing and promoting the nation in all forums.

There were five finalists each representing a town, village or administrative region in Trinidad and Tobago and competing in fashion (Swim Wear and Evening Gown) and knowledge of T&T (Research Project on their area and topical knowledge). In addition, each contestant also paraded in a Carnival costume. To be eligible to participate, each contestant had to have a link by parentage, heritage or lineage to Trinidad and Tobago.

By sheer coincidence, the winning contestant, Miss Tobago, was crowned by the Tourism Attach� of the T&T High Commission, Ms Achi-Kemba Phillips, who herself hails from Tobago.

In addition to the competitive elements of the pageant, the evening featured performances from several exponents of the main cultural art forms of the country – pan, mas, dance and music.

Themed, ‘Tropical Fusion’, a pot pouri of fashion, drama, music and dance, choreographed by Sheanna Alleyne, the opening number and stage setting was devised by Sheanna Alleyne and dance choregraphy by Caroline Muraldo. The capacity audience was taken back in time to a bygone era brought to life by the Muraldo D C, a dance theatre company. The artists performing on the night included the reigning UK Soca Monarch Trini Boi Joocie, Deborah Romain on Pan and vocals, Lady Saxophonist Sandra Grant, Soca Artiste Kanato Alleyne and Thelma Douglin on the tenor pan. The national anthem was sung by Jamima Douglas songstress also known as J Doe.

Carnival costumes were provided by Wassiville, Trinity Designs, Euphoria, Genesis and Mas with a Difference.

The newly crowned title holder of ‘Miss Trinidad and Tobago UK’ will receive a trip to Trinidad and Tobago courtesy of Caribbean Airlines with accommodation at Cascadia Hotel Trinidad and Lyn Manor Villa Bucco Tobago. She will also receive several prizes including a Gold Gilded picture frame from Campbell’s of London, a Designer hand bag from Simon-Hartman of London, The T&T Gold Book from Hansib Publications, jewellery from Anna’s Silver Jewellery and lots more.

At the end of the evening, Carivog International paid homage, by the presenting of an award, to three individuals whose contributions to the Company and its programmes have been exemplary and sustained over the 11 years of its existence. These awards were given to Carol Muraldo, Jamima Douglas and Chandani Persaud.

In addition, the following awards were made: