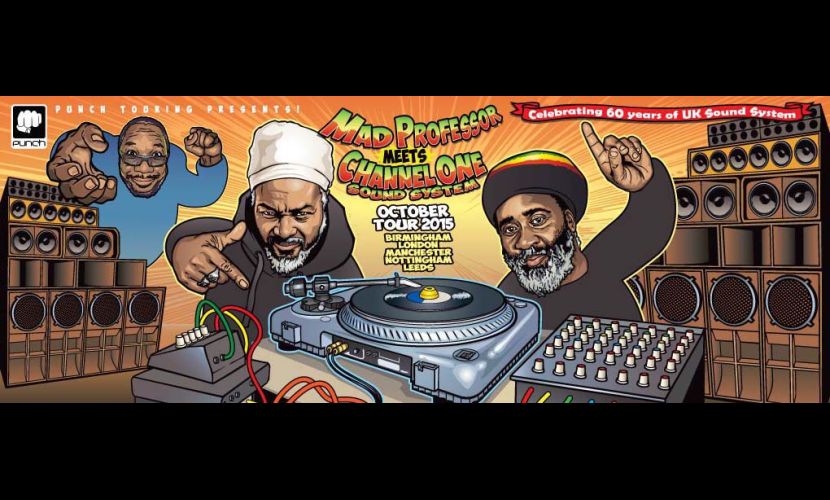 The UK’s first homegrown Sound System was brought over by Duke Vin in 1955, and it’s from this pivotal point that a culture was born.

2015 marks the Diamond Jubilee of the UK Sound System phenomenon. This October, Punch Records will present a celebratory tour to mark this momentous milestone, featuring two of the greatest roots, reggae and dub acts of all time.This five­ date, UK-wide event pairs one of the UK’s best known, foundational reggae Sound Systems, Channel One, ­with legendary producer and artist Mad Professor, whose music was created specifically to be played through Sound Systems.

Channel One, comprising prime selector Mikey Dread and MC Ras Kayleb, is one of the world’s foremost roots and dub Sound Systems. Established in 1979, they first played Notting Hill Carnival in 1982, and have been a regular fixture there ever since. Mad Professor is the esteemed dub music producer and engineer, known for transitioning dub into the digital age, collaborating with Lee “Scratch” Perry, Sly and Robbie, Johnny Clarke, Pato Banton, Jah Shaka, Horace Andy, Massive Attack and The Orb.

You might ask yourself, why does sound system culture matter? Channel One’s Mikey Dread says “Sound Systems matter because it’s a vehicle for roots rock reggae music, for people who don’t know what reggae is. So when people hear it on the sound system, rather than the radio or the internet, they get the real deal,” while Mad Professor reckons “Because it’s the way normal people, working people, communicate with each other, communicate with their peers, communicate with like-minded individuals. The official media doesn’t provide that vehicle.”

As to what sound system culture means to them personally, Mikey Dread says “After being in a sound system for 30 odd years it means a great deal. First playing in small community centres to playing on the world stage. What it’s doing is what Channel One is all about, it’s about pushing barriers and introducing people to the music.” For Mad Professor, “it’s a way of getting out what’s on my mind. It’s a way for me to get things off my chest. Like when I’m mad about culture promotions, I make a song about them.”

This tour will join the dots between some of the country’s most storied musical cites. It starts in Birmingham with BASS at The Rainbow, a modern home for rich Sound System culture, as well as being the birthplace of Punch. From there, the tour heads to Village Underground in London, where Channel One have made their indelible mark with their regular sunday parties. From there on to Manchester, a city with its own carnival; a city that’s no stranger to bass heavy sound. Then on to Nottingham, with the Kontakt crew at the Irish Centre, a venue that has always been a focal point for dub parties, before things round off at the West Indian Centre in Leeds. It’s here that SubDub have showcased endless reggae and dub DJs, and have hosted countless Sound System events with an exceptional roster of MCs and selectors. SubDub also gave birth to Croatia’s Outlook Festival, so what they don’t know about bass isn’t worth knowing.

This tour offers a great opportunity for people to immerse themselves in a music and culture rich in history and vibe, as well as a rare chance to see both Channel One and Mad Professor together, truly doing what they do best.