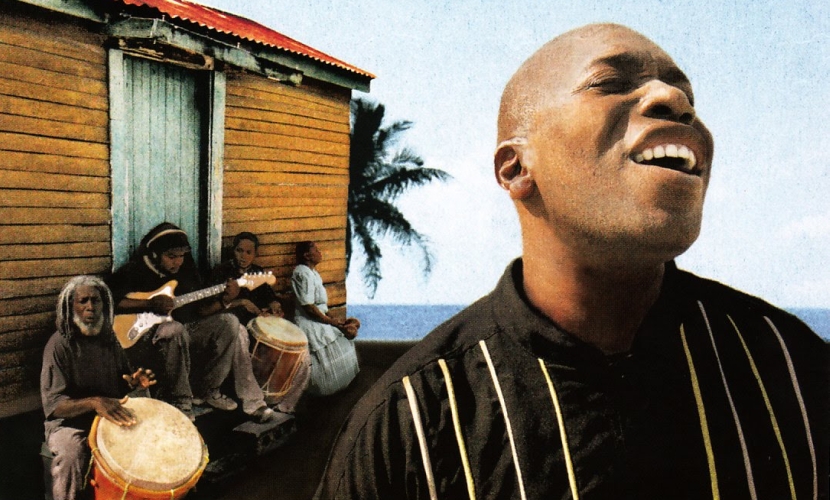 Andy Palacio and the Garifuna Collective Release Wátina The Unique and Soulful Sound of Africa in Central America.

On March 2007, Cumbancha will release Wátina, a stunning new album featuring an all-star, multigenerational lineup of musicians from the African-Amerindian Garifuna communities of Belize, Guatemala, and Honduras. Filled with enchanting rhythms, powerful melodies and a deep soulfulness that recalls Cape Verdean or Afro-Peruvian music, Wátina serves as a stunning introduction to the music of this unique and inspiring culture.

The Garinagu, or Garifuna, people originated when two large European ships, filled with a delivery of West African slaves, sunk off the coast of the Caribbean island of St. Vincent in 1635. Many of the Africans survived and intermingled with the indigenous Caribs of the region, creating a new hybrid culture. Fiercely independent, the Garifuna community resisted European colonization, and were forcibly exiled to the Caribbean coast of Central America. A small and often oppressed minority in their home countries, the Garifuna have valiantly preserved their heritage over the years in the face of tremendous outside pressures. Recently, however, the forces of globalization have overwhelmed them, threatening extinction to their unique language, traditions and music. Fewer and fewer children are learning the Garifuna language, performing the songs or memorizing the oral histories and stories that serve as the legacy of the culture.

Andy Palacio is an exception to these unfortunate circumstances. Raised in the Garifuna stronghold of Barranco, Belize, Palacio spoke the Garifuna language at home and grew up surrounded by music and other traditions. He didn’t even realize the extent of the threat to his culture until he was eighteen years old, when he traveled to Nicaragua and met an old man who was among the last in his country to still speak the Garifuna language. The elder couldn’t believe his ears when he heard the young Palacio greet him in Garifuna, crying out “Are you telling the truth?” Andy replied, ‘Yes, my uncle; I am Garifuna just like you,’” and the man embraced him and would not let go. He could not imagine someone so young could speak Garifuna, having thought the language would perish with him.

This emotional reunion led Palacio to realize that the disappearance of Garifuna culture in Nicaragua foreshadowed what could happen in his own country a generation or two down the road. At that moment, Palacio decided to follow his passion for Garifuna music, using it as a vehicle to promote Garifuna culture and inspire young people to be proud of their heritage. He gained local and international fame as a performer of punta rock, a popular upbeat dance music based on the Garifuna punta rhythm blended with pan-Caribbean styles like zouk and soca. Palacio worked tirelessly to bring attention to the plight of the Garifuna people, and in recent years has held various posts at the Belizean Ministry of Culture.

Enter Ivan Duran, a Belizean musician and producer who in 1995 founded the record label Stonetree Records with the express mission of recording and promoting Belize’s rich musical traditions. Duran eventually convinced Palacio that he should focus on less commercial forms of Garifuna music and look more deeply into its soul and roots. Duran and Palacio set out to create an all-star, multi-generational ensemble of some of the best Garifuna musicians from Guatemala, Honduras and Belize. The initial recording sessions took place over a 4-month period in an improvised studio inside a thatch-roofed cabin by the sea in the small village of Hopkins, Belize. It was an informal environment, where the musicians spent many hours playing together late into the night, honing the arrangements of the songs that would eventually end up on this album. A wide range of Garifuna styles, such as the Latin-influenced paranda, the sacred dügü, punta and gunjei, inspired their rhythms. While the traditions provided the inspiration, the musicians also added contemporary elements that helped give the songs relevance to their modern context. After the sessions, Ivan Duran worked tirelessly back at his studio to craft what is surely the pinnacle of Garifuna music production to date.

Echoes of the poignant history of the Garifuna can be heard reverberating through the songs on this album. Beaten out on distinctive Garifuna drums, called primero and segunda, the rhythms recall the spirit of a long-lost Africa, where their exact origins are shrouded in mystery. The melodies are tinged with a heart-wrenching melancholy that reflects a longing for answers to the enigmatic questions of both the past and the future, as well as joyful cries of celebration and thanks for the uplifting traditions they have been blessed with. The lyrics deal with the everyday challenges of life, faith in the face of adversity, and rallying cries of hope and solidarity.

Founded by Jacob Edgar, the longtime head of A&R and music research at Putumayo World Music, Cumbancha is a new record label that seeks to present exceptional artists from around the globe whose work merits attention by a wider public. “I started Cumbancha precisely so I could help bring wider exposure to exceptional artists and projects like Andy Palacio and the Garifuna Collective,” says Edgar, “The beauty and emotion of the songs on Wátina move me to my core, and Cumbancha is very proud to present this special production.”

Andy Palacio & the Garifuna Collective are currently scheduling tour dates in Europe and North America in the summer and fall of 2007. For more information and updates visit www.cumbancha.com.