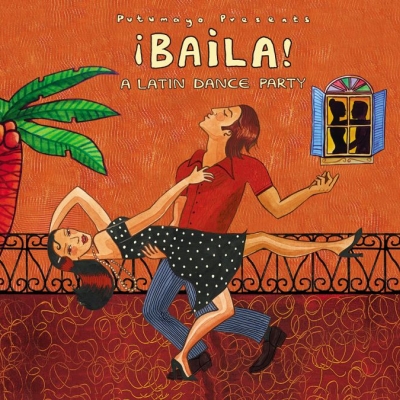 While the rest of the industry frets over declining sales, the Latin music market is celebrating its phenomenal growth at home and abroad. Salsa, cumbia, rumba and son are just a few of the rhythms heating up the charts from Bogota to Brussels, from Sweden to Senegal. On May 23rd, Putumayo World Music brings the celebration to you with the release of ¡Baila! A Latin Dance Party.

In 2005, Latin music experienced its third straight year of double-digit growth in album sales. For Putumayo, whose top 10 bestsellers include 6 Latin titles, the growing appeal of Latin music is not surprising. Latin America is the label’s fastest growing international market, and the success of albums like Salsa Around the World and Latin Lounge indicate the growing appeal of Latin music in all regions of the world. With ¡Baila!, Putumayo brings the two parties together, showcasing purely Latin artists along side musicians from other regions who have embraced Latin sounds.

The party starts in the streets of Havana before hitting the road, making stops in Los Angeles, New York, France, Belgium, Sweden and West Africa. Raul Paz kicks it off with “Mua Mua Mua,” seamlessly blending the deep grooves of his native Cuba with the contemporary stylings he’s picked up since relocating to Paris, France. Back in Cuba, his countrymates NG La Banda attempt to conquer the world from their backyard. “La Cachimba” is their mission statement announcing the virtues of a new musical style that’s sure to make them dance in Bayamo, Paris and San José, as the song boasts. From Cuba, the party travels to Colombia, where the collective known as La-33 is revitalizing salsa by reconnecting it to the genre’s golden era of the 1960s and 70s when it was the soundtrack of New York’s disenfranchised Latino community.

Not to be outdone, however, the “city that never sleeps” delivers a rhythm-driven one-two punch with The Spanish Harlem Orchestra and Yerba Buena contributing the best of the old school and the new.

The next stop on the party express is Ghent, Belgium, where Gabriel Rios landed after leaving his native Puerto Rico to live with his European lover. Experimenting with a variety of influences while maintaining his deep Latin roots has made this unique musician an unlikely pop star in his adopted home.

From Belgium, we travel to Stockholm, Sweden, where the high-powered ensemble Calle Real is bringing a thaw to their native city.

The Africando All Stars and Brooklyn Funk Essentials round out this collection of high-powered sounds, proving once and for all that the party is right here – on Putumayo’s ¡Baila!.

A portion of Putumayo’s proceeds from the sale of this CD will be donated to United for Colombia in support of their efforts to help children who are victims of landmines in Colombia.